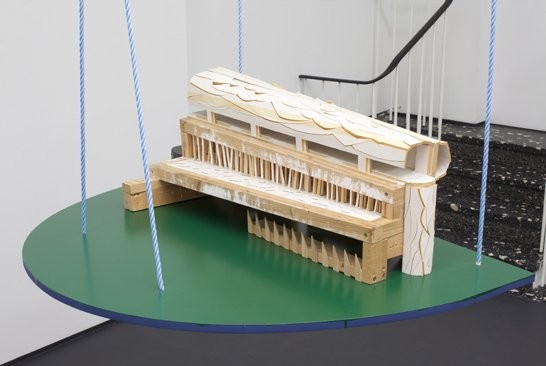 For her show Gone Tomorrow, the artist developed a kind of miniature sculpture-park in the gallery that shows her group of works that are called Somewhere in the West (since 2007). This group consists of numerous architectural models, created by the ar­tist, models that allude to utopian experiments of the architectural epochs of the last cen­turies.
In the lower exhibition space, the video installation Without Jewel brings to a con­clu­sion what is approached in a rather fragmental way in the upper exhibition space.

The history of art and architecture is always as well a history of values or, put another way, it always also describes the change of the perception of values at a particular time. Evolutions are also described by the evolution of hierarchies with which one was attempting to understand the basic structures of an era. The ever-changing values always influence also the basic materials for the creation of art. Especially in terms of sculpting each material is associated with a specific connotation. Only the original physical features of the material remains unchanged, but in the context of art, each material contains a proper cultural identity that generates a value, independent of these physical features. Anna K.E applies the alleged cultural readability to her sculptures and installations as a vocabulary, as a treasury of words, that allows her to playfully question our reception of art as well as its related system of values. She is thus playfully using chipboards, beat gold, wood, ceramic, plastic, tar, marble, and numerous sorts of materials for her series of utopian architectural models, that challenge us to leave our conventional observation of history behind and to attempt to understand immediately the structure, the surfaces, the colors and constructions. The questioning of historic values is not restricted to the understanding of materials, but is continued in the questioning of the originality of a specific work. So, the sculptures exhibited focus on models of architectures. Even though these constructions only allude to utopia, their character as references and reproductions is preserved through the fact that they can be classified as architectures. Only the hanging structures that carry the models remain free of that representing function. Thus, the genuine idea of a "work" rather applies to what used to be the base of a sculpture.

Such a reversal of the conventional hierarchies can also be seen in the digital prints Flushing Av. and Jefferson Av. that show the installation of the sculptures in the gallery as if they were collages of computer drawings and photographs of the models: the reproduction of the exhibition turns into a distinct piece of art.

Whereas the exhibition in the upper space of the gallery focuses on the outer conditions of art production, downstairs in her installation Without Jewel Anna K.E prioritizes her inner world. In what appears to be an industrial frame, a dyed fur coat, filled up with a non-visible volume is hanging. From the sleeve of the coat a video loop is projected on the wall, showing the artist having a futile fight with a rubber mattress.

Anna K.E. was born in 1986 in Georgia and graduated in 2010 as a master student at the Art Academy in Düsseldorf with Prof. Georg Herold and Prof. Christopher Williams.
www.philippvonrosen.com