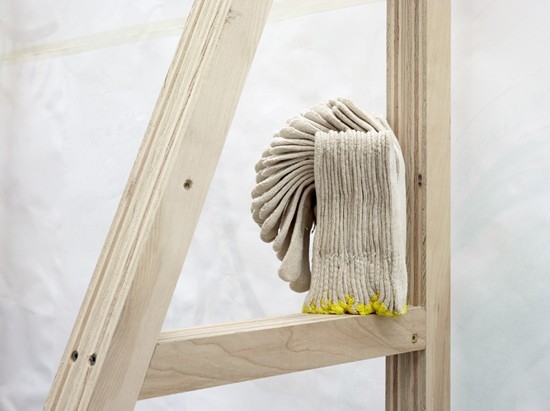 We are proud to inaugurate on November 15 A Bandit from the Brick Factory with works by Anna K.E. In our second show with the artist we show the two large-scale drawings I Sup­pose My Doctor Is Dead, the installa­tio­ns After Party 01!-03!, the three-channel-vi­deo-installation with the title Multiple Key­hole as well as three more videos.

Anna K.E. opens up her show with the installations After Party 01!-03!. We see three MDF-frames with one image each. A bench, enlightened by a neon bulb invites us to sit down and to contemplate the image. The situation reminds us of pewage, chapels, al­tars as well as cinemas, that is: places that stand, on the one side, for religious, "ab­so­lute truths", and on the other side for Illusion. This scope is also mirrored by the image: a plotted and enlarged DinA4-drawing that shows mainly shadows. The media "draw­ing" can normally be considered as a particularly authentic, truthful and honest media. In the form of a digital copy, however, we are confronted by a playful deception. And the shadow itself is something real and authentic, because it is always the shadow of some­thing that exists. But the shadow is also only the image of this object.

Each of these three elements can be described as an individual one-person-object. How­ever, fort his exhibition, Anna K.E. has combined the three After Parties and created a spatial, process-like total-installation. Not only are the three elements interlocked. But one of the images is placed casually aside; it has not been mounted and – thus – points towards the process of installing or de-installing the construction. In any case: instead of seeing the (alleged) projection, we see at the wall to the side of this installation a film: Anna K.E., who has been also educated as a ballet-dancer, dances the famous solo Dying Swan. Instead of a tutu she wears a heavy wooden construction that reminds us of a bedframe. While she is performing a first round of this solo very close to the classic re­pertoire of steps (small sidewise placed steps and wing-like movements of the arms), she is – due to exhaustion – loosing more and more control of her body and of the ideal form during the next rounds until the point she is only able to do kind of abstract steps. All this happens in the background of the filmed image. The foreground is dominated by an intensively illuminated table in the artist's studio. This table can be described as a stage in the same way in which the After Party-in­stal­lations can be seen as scenic stage-elements.

The game with the digital and analogue worlds is continued by Anna K.E. in the two more vi­deo­installations that complete the After Party-parcour: around 150 photographs, partly ab­stract-formal depictions, partly seemingly intimate snapshots from trips around the world, are presented as slideshows, including the typical sound of a moving slide-ca­rousel. However, there is neither a clicking carousel nor is Anna K.E. reducing the se­quence to the rhythm of such an apparatus. She is rather controlling consciously the time each image is shown and she is adding the clicking sound digitally.

The stillages of the two oversized drawings I Suppose My Doctor Is Dead recur to the idea of "construction" in this exhibition. Instead of showing them hanging on a wall, pro­tecting them with frames, these drawings are nailed down to the stillages and thus con­tinue the constructive and performative attitude of their production process: Anna K.E. works on the floor. Her production is alternating between impulsive gestures and obses­sive, detailed work. She is walking on her drawings and traces of these movements can be seen all over. There is nothing "digital", we experience the authentic reality of the fra­gile paper and the multiple techniques with which it has been treated.

The stillages have rolls and thus the drawings, that create in their current constellation a scene and suggest a dialogue between themselves, can be constantly moved around.

The videoinstallation Multiple Keyholes consists of three looped projections. The central piece is a 15-minute film that shows Anna K.E., filmed contre-jour, performing a se­quence of movements on the window sill in her New York studio. In this dance she is show­ing formations that resemble hieroglyphs; in the same time, these movements are re­lated to the grid of the large window and its frames. One is tempted to think that one can understand the symbols. In the end of the film the image dissolves and only white re­mains. This is the mark for the resurrection and it is also the starting point for the dra­ma reminiscent of the Sisyphus-saga.

To the left of this projection, only the symbols are shown, to the right we see in a 11-se­cond rhythm the final fall of the artist.

Anna K.E. (born 1986 in Georgia) has graduated in 2010 at the Dusseldorf Academy af­ter having studied in the classes of Georg Herold and Christopher Williams. Her works have been shown in the following exhibitions: