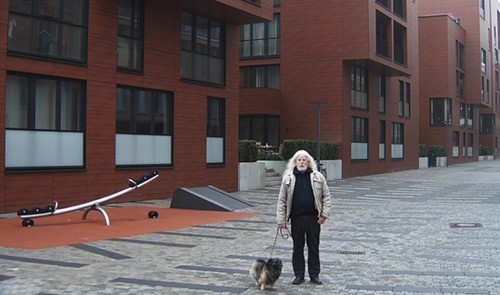 Fränze Hoppe produces her drawings of the human figure with a hard pencil on different types of papers, often found, often cut irregularly. Occasionally, these figures are colored in light blue or turquoise. Due to the thin lines and to the frail and (seemingly) undecided dash they are often barely readable. The way Hoppe draws and the depicted subjects are congruent: the sometimes sexless figures seem as if they do not know towards where to orient themselves, or what to do with their exceedingly elongated bodies that are situated in precarious positions. Still, an exchange, a dialogue is possible when several figures can be seen. However, the topic remains obscure to the viewer. These works are not narrative even if the figures – seconded by title of the show – seem to allude to functions and actions that seduce us to think that depicting scenes in a public bath is meant to be the topic on which these drawings dwell. However, Hoppe subverts such kinds of narration as well as any kind of easy-readability of her drawings. Instead of this, she creates atmospheres that remind us of works by modern artists such Egon Schiele, and that are in their mute speechlessness and the loneliness of their protagonists very contemporary and relevant (insofar, they let us also think of more recent work, for example by Miriam Cahn or Rita Ackermann). It is not a realistic (and maybe platitudinous) and directly reproaching way of presenting the human being as someone meandering lonely (but chatting) in the endless www, but the viewer of Hoppe's drawings experiences such a kind of life in drawn metaphors for being and feeling separated and insecure.

The figures are even on a formal level not working as bodies in the space but rather as two-dimensional decals. From time to time they receive a certain kind of hold by objects like pedestals, geometrical bodies, architectures, bowls or umbrellas, drawn in crayon or colored pencil. This does not counter, though, the precarious situations in which the figures exist. Far from that! The visibility of the difference between what can be – bodily substance and solidity – and what conditions the existence of Hoppe's figures – insecurity and instability – is even intensified by the contrast of the techniques used to do the works.

Parallel to our exhibition she will show with her class from January 17, 2010 on (opening at noon) in the exhibition La Bonne Horse in the Bonner Kunstverein.


Hänschen klein by Corinna Schnitt begins with a close-up of a painted genre-scene of the 18th century. At first, we see two women and a man passing through a gate. The viewer has no chance to enjoy this scene for long, because with the start of the film begins an almost endless zoom out of the image. This distancing movement shows that the picture is more complex: three figures, whose functions are not immediately understandable for today's viewers, are added. In addition to that, we learn that the image is painted on a cup. Then, elements that allude to a Dutch still life of the 17th century become visible. That evokes for a moment the impression that a baroque still life is mirrored with filmic tools. Again, the expectation of the viewer – to be able to study intensely the different elements – is subverted by the continuous zoom out of the image and – seen on a timeline – into the presence. Subsequently, we learn where the table is situated: not in an interior, as one could expect, but on a terrace of a newly built neo-modern apartment building with a fake wooden façade. The terrace is surrounded by accurately cut hedges, and the whole location is part of a seemingly endlessly large group of identical buildings in a traffic-free urban area. In the moment when the camera shows a wide shot of this, the linear movement – being as such a visual mirror of the passing by of time – is stopped. From the diagonal of the image, two pedestrians (one following the other, each accompanied by a dog) enter the picture. Whilst the first man just passes by, the second – an elderly man with flaunting white hair – turns towards the camera, positions himself in front of it and performs the totally unexpected act to sing the song that gives the video its title: Hänschen klein. After having performed he disappears out of the image, stepping down stairs that are obviously located between him and the camera.

The rigorous linear movement of the image, the seemingly imperturbable passing by of the time, is caused by the different states of the zoom (from close-up to wide shot to medium close-up) that alone are depicting the filmic element of time on a geometric axis. This and the acuteness of the architecture – subverted by the fake wooden façade and its feeling of a rustic hut – is countered by the two men that walk through the image and thereby cross the main axis of the video as well as by some elements of chance: birds flying through the image, a tenant checking out what is happening on the street, or the two dogs that are again an element of some kind of freedom. The correlation of the homey nostalgic idyll suggested by the still-life and the intimate situation of the terrace and the idea of the wide world – to which the sound of the nearby harbor as well as the more or less wild animals allude – is metaphorically illustrated with the performance of the song, a song that comprises already since the 19th century the conflict of home, nostalgia and wanderlust.

Our exhibition is completed by the video Spielplatz (Playground, 2007, 15', Loop) in which Schnitt again works with one continuous position of the camera, however, shooting for 24 hours.
www.philippvonrosen.com