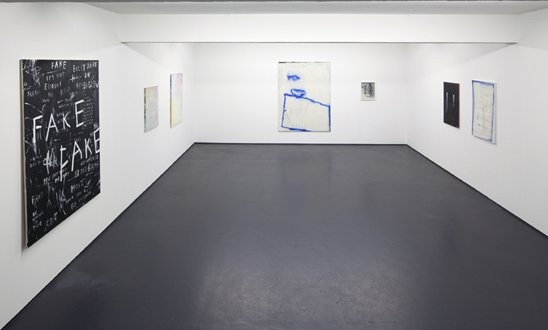 Dirty Dancing assembles the work of three artists exploring the possibilities of contemporary painting, in a relatively rough, even aggressive way with techniques that include mixing spray with acrylic paint, glueing dirty artefacts on the canvas, including words or phrases, printing of randomly chosen objects or even destroying the canvas with cuts. In spite of all these formal correlations the three artists work with completely different strategies.

Michiel Ceulers’ paintings investigate the medium of paint. At first these inconvenient, difficult to read, uncompromising and very diverse paintings are hard to grasp but on a second and third look, these small, rather dirty paintings are very precise and sharply handled, cheekily referencing previous historical styles. Jostling for position in his studio, they are treated roughly and poorly, they lean amongst and against each other (whilst some are still wet) producing scaring and marking. The dirty marks, thumb-prints, ripped and badly stretched canvases are integral to the work. Ceulers is not interested in beautiful or representational pictures, he is simply analyzing shapes in color, brushstrokes and light. Once the paintings have left the confines of his studio they cease to be in a constant state of flux and they finally become. (translated from the Flemish text by Luc Mattys)

Michiel Ceulers was born in Waregem in 1986. He completed his MA in Painting at KASK, Ghent. He currently lives and works in Amsterdam where he achieved a two-year residency at the Rijksakademie - up to now the youngest artist ever to be admitted to this renowned institution.

In her large scale paintings Cordula Ditz appropriates the artistic strategies of other artists and foils them. She treats her canvases with an excessive power almost to its partly demolition. The powerful compositions of wild lines, geometric forms and sprayed elements give her acrylic works a passionate intensity but also alienate the viewer with it’s aggression. Crucial to these works is the use of text, which is usually incorporated into the visual form as fragment or slogan-like heading and thus becomes an important compositional element. These words are mostly quotes from films, fantasy series or punk songs – or statements by well known artists. Many of the sentences function as both witty and challenging commentaries addressed to the art world and the market – or they reflect the artist’s own role in these systems. (comp. Opitz, Christiane in Cordula Ditz, HH 2011)

Cordula Ditz was born 1972 in Hamburg. She studied painting at the HKB in Hamburg from 2002 – 2008 (in the classes of Franz Erhard Walther and Andreas Slominski) and received in 2011 the scholarship of the city of Hamburg.

David Ostrowski declares himself as a conceptpainter without concept. With this ironic formula towards contemporary art the fomer student of Albert Oehlen describes his painting as something that rather "just happens" than something that is created on purpose. The single elements in is works should look like randomly occurred traces. To achieve this Ostrowski tries to fade out all his knowledge and mastery in painting and "to paint – as a right hander – with the right hand as it was his left." In this state of indefiniteness cryptical forms arise, which appear as failures on a thrown away scrap sheet. But the incidental marks are what Ostrowski is interested in. In a quite slow process he modulates the various painted, glued or sprayed elements on the canvas until he finds what he seeks for in painting: pure beauty.

David Ostrowski was born 1981 in Cologne. From 2004 – 2009 he studied painting with Prof. Albert Oehlen at the Kunstakademie Düsseldorf. In 2012 he will receive the scholarship of the Kölner Kunstverein.
www.philippvonrosen.com