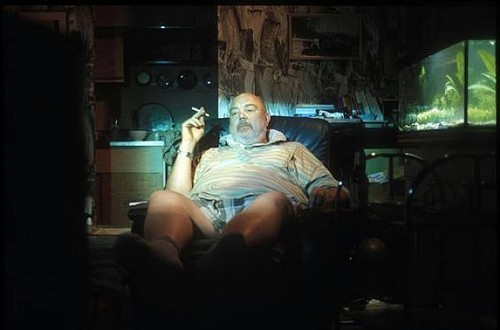 
We are glad to present – for the first time in Cologne – Reynold Reynolds' Six Apartments (2007), the latest production by the artist. We will show, besides this 12min-double projection, the video-installation Burn (2002), known from the Berlin Biennial 2006, and The Drowning Room (2000).
In Six Apartments two cameras glide alongside the façade of a house, thereby documenting the life of six inhabitants. We get to know in the regular course of the images – as if they were shot from a Paternoster-elevator – the different protagonists: an old woman, an intellectual, a lover of exotic animals, a woman in her 30ies, doing a diet, a young woman that seems to take drugs, and a retiree watching TV. Soon the distanced camera is replaced by detailed images that bring us closer to the isolated, lonely people. We see them following their daily routine and develop an emotional proximity that is compassionate, detesting, longing or appalling. Step by step we understand that we watch different days or even months and that we follow the process of aging, dying and decaying of these people. With images known from horror-movies, Reynolds documents in a poetic way the deterioration of life. Chaos overcomes order, larvae, worms and other organisms decompose what civilization has built. These images put the meaning of our lives – in relation to that of the microorganisms – in the foreground of our perception.
With Six Apartments Reynolds continues what could already be seen in Burn: a surreal scenario of decay of civil life. Burn first shows a woman and a man that read the paper or a book, unperturbed by the flames that destroy their apartment. The two do not communicate but there exists a feeling of belonging together that does not need (or find) words any longer. After approximately half of the film, we get to know the cause of the fire: the partner of another woman, sleeping, sets her on fire after he has poured gasoline over her. Surreal is not only the action and the fact that burning people are only disturbed by the fire – as if it was a fly – but not really hurt, but also the cross fading used by Reynolds to relate the two couples. Like in Six Apartments, he creates a speechless world characterized by loneliness and a lack of understanding of the other. The fire becomes a metaphor for psychological violence and mutual disinterest.
Also the earliest film of our program, The Drowning Room (2000), leads the viewer to a world in which the civic normality of our lives is transferred by surreal violence – in this case: water drowning an apartment – into another world. All that seems to be sure (rules of our societies as well as natural laws) is derailed. Again, a natural power is questioning the meaning of life, it can be read as a metaphor for the destroying powers of our societies.
Reynold Reynolds was born in 1966 in Alaska. After having studied art and film he lives since 2004 in Berlin where he received a scholarship of The American Academy combined with a studio at the Künstlerhaus Bethanien. He has shown his video-installations since 2003 in places such as The National Gallery of Art, Washington D.C. (2003), the UCLA Hammer Museum, Los Angeles (2003), the Martin-Gropius-Bau, Berlin (2005), the P.S.1, New York (2006), the Bass Museum of Art, Miami (2006/07), the Kunst-Werke, Berlin (2007), or the Carnegie Art Center, New York (2007) as well as during the Berlin Biennial 2006.
www.philippvonrosen.com