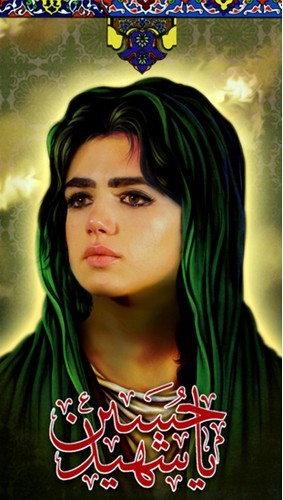 We are proud to present on May 14, 2010 at 7 p.m. Icons, our third show of the US-American/Iranian artist Shoja Azari (*1958). Icons is the title of a group of five video portraits (2010) that are installed in the upper level of the gallery.

They show 19th-century depictions that can be described as naïve and heroic of legendary, Shiite imams. These heroes of the Shiite history pose in front of a coulisse of overwhelming nature that could be part of the illustration of a Karl May-novel. They are shown with the insignia of manly power: a lion lying at their feet, a dagger in their belt, bow and arrow on their back. The images, being kitschy and stilized, are also provocative and innovative, because Azari replaced the faces of the male martyres with moved faces of women. „Moved“ can be understood in its double sense, because – on the one side - the faces are videos that have been integrated in the historic original, and – on the other side – the women are emotionally moved. Silently these martyrs, clad in folkloristic attires, return the viewer’s gaze. The mimic, reduced to the minimum, to the blink of an eye, the tremor of a mound, a tear that leaves an eye, produces a slowness that is seen as leaden deadlock. This paradox of the image that is doing both, moving and standing still, and that reminds us of Douglas Gordon’s Flashes or Bill Viola’s re-interpretations of renaissance paintings, allows Azari’s Icons to unfold a power that goes beyond the mere exchange of sexes in these historic images. This exchange „de-masculizes“ the patriarchial hegemony over the Shiite martyrdom and thereby destabilizes the legitimy of the current Iranian regime as the „true“ Shi’a. In addition to that, the mute gazes of the anonymous women/icons lead the viewer back to the people that suffer under the current government and its violent mechanisms of power. The gaze also lets us think of the people whose readiness to make sacrifices gave hope to exiled Iranians all over the world during the Green Revolution.

On the lower level of the gallery we show the video installation Coffee House Painting from 2009. Again, Azari uses a historic image. Here, the painting The Day of the Last Judgment by Mohammad Modabber from 19th century, that is very well known amongst Iranians, serves Azari as the basis for a video collage. The so-called “coffee house painting” was a widely known and spread way to communicate Persian myths and legends to a large public. Azari uses this historic function of the early image by integrating filmclips that were downloaded from the internet and that show such themes as current wars in the Middle East, the cruel deeds of Abu Ghraib, the demonstrations after the elections in Iran, or how Israeli bulldozers destroyed Palestine houses. It seems as if it was by chance how single parts of the paintings are activated and thereby confront the viewer with a world in a status of chaos. This is a world where no blame can be assigned but where only victims can be recognized.

Iranian-born Shoja Azari has lived in New York City since 1983. His films and video installations have been screened and exhibited widely around the world. Most recently, his video work has been shown in solo gallery exhibitions in London and New York. Since 1997, he has collaborated with Shirin Neshat on film and video installations including Women Without Men, which won the Silver Lion for best director at the 2009 Venice Film Festival.
www.philippvonrosen.com