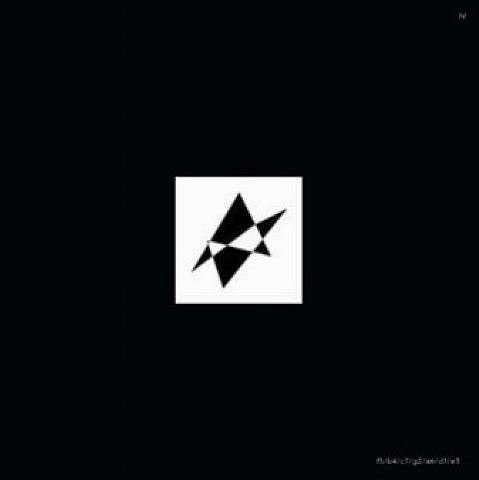 On Friday, March 7, 2008 at 7:00 pm we will be presenting Salon des Oiseaux -- our second exhibition from Ulrich Rückriem (*1938). With the Salon des Oiseaux, Rückriem presents an artistic process whose ultimate visual effect reminds us of a flock of birds. This concept has been shown already in different forms -- for instance in the Museum Ludwig, Cologne -- however, it will be executed for the first time in a site-specific way in a space of approx. 6 by 12 meters with a height of 3 meters. While the concept is structured logically, it is too complex to be summed up in just a couple of sentences. Therefore, a separate explanation of this structure is attached to the end of this press release.
The result of the concept's mathematical process is a dynamic, acute-angled form reminiscent of a bird (fr: oiseaux). Rückriem believes that such forms should be realized in different media, such as on paper, walls, floors, ceilings, windows, canvases and printed in books. However, the forms must always be related to the format on which they are done. The forms can be black and white or done in colors, and they can be done with a positive or a negative form on the ground.
In the Salon des Oiseaux this concept is developed further: each wall is covered with 256 (16 x 16) fields. Within each field, one of the bird-forms is situated. These birds (768 in total) are applied to the walls with wallpaper that has been produced especially for the space and that can be redone for other spaces. The colors of the wallpaper are light grey and white. The result is a vibrating flock of birds that seems to dissolve the static of the walls. Seen in context of his sculptural œuvre, this emergent quality of motion stands in contrast to his typical method of grounding his works in the characteristics of the physical spaces they occupy.
For Rückriem, the specific attraction of this exhibition is the liberation from the necessity of working with heavy materials and its site-specificity. Yet, these drawings must be seen as a continuation of his former work in the way they use the so-called 8-Queens-problem of chess. They are inherently mathematical and they follow a logical process. However, in effect they can be done by any person, at any location and without too much of an effort. They are characterized by a liberty, and an emotionality, and a playfulness that is far away from the austerity and toughness of Rückriem's sculptural œuvre.
In our exhibition, besides the Salon des Oiseaux, we will be showing two further series of drawings:
Using transparent papers in the DinA 1-format, Rückriem recapitulates with framed and layered sheets his divisions and cuts of volumes, respectively planes. These works can be considered as a retrospective of the concepts of his sculptures. For instance, there is a frame where the first sheet is divided by a vertical line in two halves, the left colored with graphite, the right remaining untouched. This right half is – in a sheet lying below the first sheet – again divided in two halves, this time by a horizontal line. The upper half (one forth of the whole) is colored with graphite, the lower remains untouched. On a next sheet, the lower half is again divided by a vertical line in two halves and the right part (one eighth) is colored with graphite while – again – the left half remains untouched, and so forth. By doing these divisions, a snail-like form is developed that – together with the different hues of grey on the layered sheets – gives a certain dynamic to the static concept. This process has been used by Rückriem already in his sculptures. Another group of drawings can be described with the words "towards the square". Here, Rückriem divides a rectangular format in a way that he produces a square, colored with graphite, on the left side. The next sheet is again divided in a way that a square is produced, this time on the right side, again colored with graphite. The result of these divisions is a centered stripe. This stripe is divided again in a way that – on two different sheets, two squares come out, one in the upper, one in the lower half. The remains is again a small stripe that is divided in a left and a right square. We know this principle also from Rückriem's sculptures.
All these drawings use divisions, like Rückriem's sculptures do, that follow their own logic on the one side and that are free abstractions without any sense apart from this logic. It is significant that Rückriem considers these drawings as very flat, but still three-dimensional works that are related to his sculptures by the fact that they have layers of sheets of paper.
A second series of drawings will be exhibited, which can be seen independent of the concept of the Oiseaux as well as of the constructive past of his sculptures. Rückriem places 7 points on a different number of transparent sheets in DinA 4-format and draws lines from one point to the other. If this produces fields, they are colored with graphite. The result of the free, spontaneous, and somewhat surrealistic way of placing the dots are – surprisingly enough – figurations that remind us of drawings of Russian constructivists.
www.philippvonrosen.com