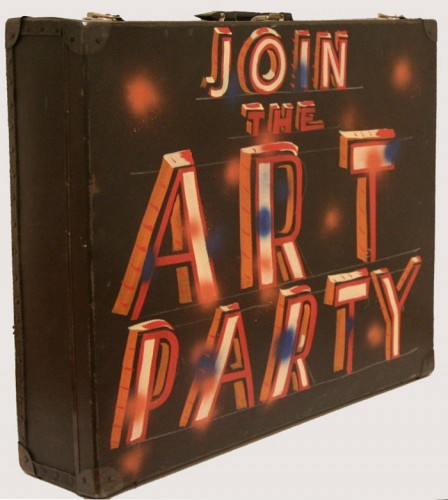 We are pleased to present an exhibition of new work by Bob & Roberta Smith at The Boiler, featuring his Gotham Golem, conjured by the artist to launch The Art Party and to serve to protect the creative arts. Smith’s work covers a range of genres and media including painting, performance, music, and radio broadcasts, all with a dry, biting humor and a strong DIY spirit. “By combining such diverse media with the language styles of alternative protest movements, folk and punk, Bob and Roberta Smith attempts to challenge established authorities and values, and encourage creativity in people.” (BAC) His previous exhibitions at Pierogi include The Art Amnesty (2002) and Birds are the New Fish: Renaming the New Millennium (1998).

The Art Party of the USA will be launched at The Boiler in Brooklyn, New York on 11/11/11 to advocate creative cultural innovations and solutions to America’s financial crisis. The Art Party is a response to the Tea Party. Inspired in part by the 1930′s WPA Program where artists like Lee Krasner, Dorothea Lang, Ben Shahn, and Jackson Pollock were central to an imaginative cultural investment and were put to work to inspire America. They “...didn’t restart the economy by any shape or means, but they did provide a narrative of hope and showed that art provides something worth living for.” (Smith) Rather than cutting social programs The Art Party advocate creative cultural solutions to rebuild America. The Art Party seeks to provide a creative yet critical discourse of hope in response to the Tea Party’s discourse of austerity and despair. The Art Party stands for stimulus and sensible long-term measures to rebuild American confidence. The Art Party says singers make America sing and dancers make America dance. The Art party celebrates that innovation comes from sheets of blank paper and pencils. The Art Party has a broadly liberal and humanistic agenda on other issues. Where the Tea Party is hawkish the Art Party is peaceful. The Art Party is opposed to the death penalty and supports women’s rights. The Art Party is not a formal political party but rather a pressure group and natural home for progressive liberal people to unite on issues of agreement. The Art Party understands that the American left is concerned about the failures of the Obama presidency but it celebrates Obama’s landmark election as a fundamental shift in American political discourse and seeks to preserve and build upon the gains made in 2009.

In Jewish folklore a Golem referred to an amorphous, anthropomorphic figure brought to life to protect the Jews. “Golem was sculpted in 16th Century Prague to save the Jews from the anti-Semites. The Gotham Golem has returned to save liberal America using his or her special power of creativity.” (Smith) This exhibition will feature a large-scale sculpture – The Gotham Golem – created by the artist to protect the creative arts and launch The Art Party. Fabricated from scraps of wood, found objects, and cloth, the Golem will be covered with Smith’s signature DIY signage slogans as well as projections.

During the opening reception, at 8pm, Bob & Roberta Smith will read The Manifesto for The Art Party to music by the extraordinary Avant letterpress trombonist Dikko Faust. Pierogi and Purgatory Pie Press are proud to announce the release of a limited edition letterpress print (pictured above) to celebrate the launch of The Art Party and The New York City Gotham Golem.

Bob & Roberta Smith’s work has been widely exhibited internationally. Pierogi hosted Smith’s first US exhibition in 1998 (Birds are the New Fish). Smith was born in London and received a BA from the University of Reading and an MA from Goldsmiths College, London. He currently lives and works in London where he also serves as a Tate Trustee and as an artist member of the Tate Modern Council. His artwork comprises the cover of the recent D & AD 2010: Everything Is Made and a monograph, Bob and Roberta Smith: I Should Be In Charge, was published this year by Black Dog Publishing.
www.pierogi2000.com