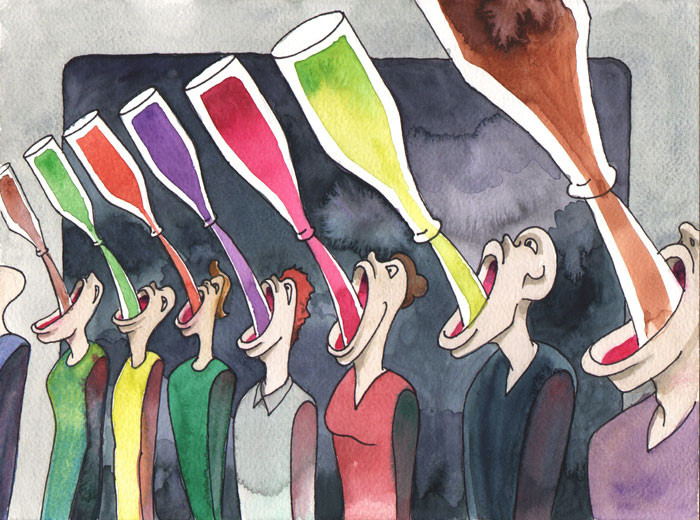 Pierogi is delighted to present an exhibition of Brian Dewan’s most recent I-CAN-SEE filmstrip, “Pop.” The filmstrip was an economical medium employed by public school systems, religious education and sometimes commercial presentations. Pedagogical in purpose, a narrator addresses the viewer – an ostensibly objective party whose ontological view seeps into the oration, his tone by turns benign and authoritarian.

The filmstrip “Pop” (as in soda pop) chronicles the history of carbonated beverages, their modern use as a recreational food product and their 19th-century origins as patent medicines containing opiates. Pop is revealed as the point of contact between industry and the consumer, predator and prey. Pop, neither food nor drug, is the medium through which a corporate entity can insinuate itself into the body.

Ink and watercolor pictures that make up the filmstrip will be on display in the gallery as well as sculptures and objects that entwine themes of gratification, the body, playthings, dope, pacifiers and effervescence. (Brian Dewan)

This will be Brian Dewan’s sixth one-person exhibition with Pierogi. Dewan is a visual artist as well as an accomplished musician and performer. His previous I-CAN-SEE Filmstrips include Before the White Man Came, Deuteronomy, Grimm’s Tales, The Course of Your Research, The King of Instruments, and The Habit of Innovation, among others.
www.pierogi2000.com