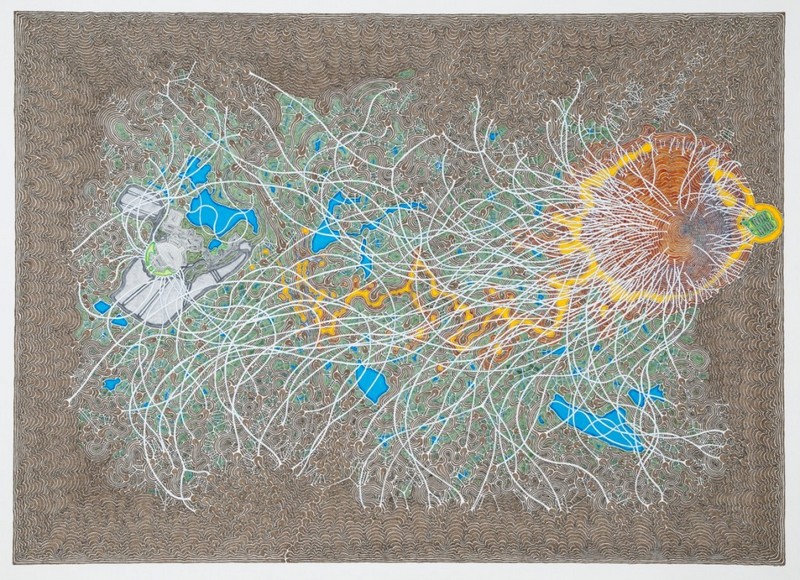 Pierogi is pleased to present an exhibition of new work by Daniel Zeller. In his sixth exhibition at Pierogi, Zeller’s drawings continue to oscillate between micro and macro views of invented worlds and organisms. Using only graphite or ink and acrylic on paper, he explores incredible nuances of texture and structure that develop into powerful extensions of perceived reality.

The language of mark-making and imagery in his drawings to date has been entirely invented based on his interest in satellite images, topographical maps, electron micrographs, anatomical drawings, among others. Recently, Zeller has begun adding to this language elements referencing actual man-made structures and natural phenomena. In one work, “Vatican / al Haram,” his abstract marks surround and coalesce into the footprint of the Vatican complex with a river-like form leading to the mosque structure. In another, “Tar Sands Woodlands,” the organically shaped footprint of the oil sands mining operation in Alberta Canada, is juxtaposed to the rectilinear shape of the Woodlands Church Fellowship Campus, a mega-church in Texas. In each work an actual site is referenced but, as Zeller notes, fact and fiction merge to become something else, and of primary importance is invention through the drawing process.

All documents, images, and ideas grow increasingly fictitious with the passage of time and distance from their original context. Fiction, like most things, encompasses a scale ranging from wildly outrageous, to that which can seem indistinguishable from fact. We are inundated with information, virtually all of it containing an unknown ratio of fact and fiction. Each of these drawings incorporates features which have their origins in specific factual information, culled from a variety of sources, satellite imagery predominant among them. While the embedded information acts as something of a scaffold or a seed from which the work develops, the process of drawing remains central and is what ultimately determines the result. (Zeller, 2013)

Zeller’s process is direct — a fluid series of spontaneous choices governed by self-imposed rules and conditions. The main rule is to respect what has already been put on the page, not to cross or obscure lines already laid down. A tension between spontaneity and predictability is central to this process, allowing for its inevitable evolution.

“A spectacle can be created from the most modest means.... Daniel Zeller manages with just pen and ink, and sometimes just pencil. His drawings...are pulse-quickening, reason-defying wonders, testaments to the boundless potential of the human mind and hand.” He “...traces complexity itself, as a condition, a matter of connections, divergence, transitions and completions, the known and the imagined reconciled with extravagant finesse.” (Leah Ollman, The Los Angeles Times)

Zeller’s work has been included in numerous exhibitions and is part of the permanent collections of the Museum of Modern Art (NYC), the Whitney Museum of American Art (NYC), the Albright Knox Museum (NY), among others. He currently lives and works in Brooklyn, New York.
www.pierogi2000.com