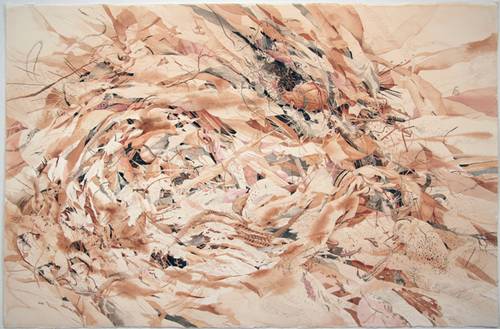 Darina Karpov’s delicate works on paper and paintings draw you in to what initially appear to be dynamic abstractions, yet, upon closer inspection, each work describes a mini-world teeming with elements that teeter between abstraction and figuration. What appears to be a group of intersecting lines turns out to be a telephone pole or a tree veering off onto a different plane. Everything resides in a convulsive space that condenses, expands and contracts. The result is a terrain that is both a vast landscape and a cluttered cavern; a space that is flowing and transitory like water, and fixed like a stone or crystal.

According to Karpov, her work “...forms like a virus, proliferating, shifting directions, plotting and transforming the space. The elements appear near and far; dense clusters disperse into the whiteness of the paper. Juxtapositions of abstraction and figuration, of familiarity and strangeness create an interplay of opposing forces. Tensions explode in chaos, disrupting any attempt at containment.” (Karpov, 2006)

Karpov was born in Saint Petersburg, Russia. She received her initial art training at the preparatory school for the Academy of Fine Arts in Saint Petersburg, Russia and later studied Costume Design at the Moscow Institute of Technology. She moved to US in 1991 and studied at Maryland Institute, College of Art graduating with BFA in 1998. She received her MFA from Yale University School of Art in 2001. Her work has been included in a number of group exhibitions in New York and Leipzig.