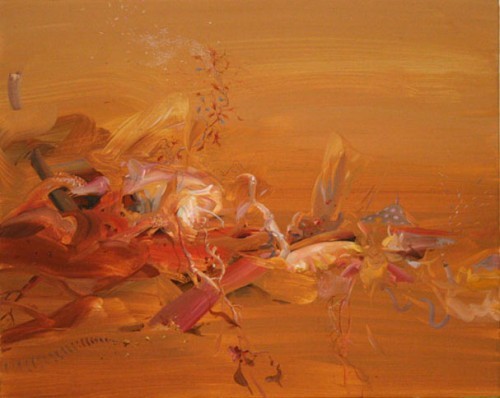 In his recent essay “Agrarian Anxieties,” historian Steven Stoll notes, “Whenever we seek control over our tiny scrap of the universe, we create hybrids—not fuel-efficient cars or cross-pollinated flora but composites of nature and culture that we stitch together, bring to life, and imagine serve us rather than stalk us.”[1] Stoll is talking here about pesticides, antibiotics and the oil spill in the Gulf of Mexico, but he could as easily be describing some of Darina Karpov’s major thematic concerns. Although her work is rarely if ever topical, hybridity run amok is one of its foremost subjects—its object matter is always in a state of forming, transforming or dissolving. In fact, Wayward is itself a hybrid, a transitional exhibition made up of pieces of disparate media and formats. It includes small oil paintings on canvas and panel—which represent a new direction for Karpov—as well as larger works on paper. The compositions of the large drawings have a kind of centrifugal antigravity and delicate color that are reminiscent of the high rococo; their crystalline structures spread deliberately across the surfaces of the paper, inviting slow scans from a distance while rewarding closer looks with spectacularly rich and varied details. The oil paintings tend to compress their constituent elements into much smaller formats, the primary effect of which is to allow the viewer to apprehend the details as well as the overall designs at once from an intimate distance. This intimacy, combined with the paintings’ relatively emphatic color and vigorous gestures, provides effects that are startlingly intense, almost violent. The color in most of these works trades delicacy for power, favoring a combination of acid blue-greens and reds that recall the palette of Delacroix’s late paintings. The paint application is also uncharacteristically forceful; Karpov, who typically hides her hand with a nearly superhuman fastidiousness, here leaves her brush marks unabashedly visible. They tie the designs together with remarkable speed and energy, while also providing a counterpoint to the meticulously limned forms that seem to materialize spontaneously from them.

Regardless of their technical and formal differences, all of these works continue Karpov’s investigation of the grotesque. This concept may seem a surprising one to apply to her work, but, as Robert Storr has pointed out, the grotesque has typically been hidden in contemporary discourse under a number of guises, such as the uncanny, the carnivalesque and the formless,[2] each of which may in their own way seem more germane to Karpov’s concerns—the uncanny as an estrangement of the familiar by means of a kind of psychic hide-and-seek, the carnivalesque as a defiance of hierarchy and category, and the formless as an operation invoking horizontality, pulsation and entropy.[3] Additionally, one should recall that the concept of the grotesque entered Western culture during the Renaissance as a description of Roman frescoes of almost decadent sophistication, whose primary features were graceful, ornamental arabesques and fancifully inventive hybrid forms. The meaning of the term was soon expanded to include work with similar characteristics, such as the Northern Renaissance paintings of Bosch and Brueghel, whose ancestral presence can be felt in a painting like Shattered Shine, 2010, which resembles an abstracted Temptation of Saint Anthony or Fall of the Rebel Angels set against the backdrop of contemporary Gowanus. In fact, the very indefinability of Karpov’s forms makes them arguably more grotesque than Bosch’s temptations, since, according to Geoffrey Galt Harpham, when “horrifying non-things are regarded as ‘temptations,’ they are not only moralized, they are de-grotesqued. The grotesque form is one that is apprehended at a certain level of generalization.”[4] And here, finally, we come across another connotation of the term wayward, a drift away from a moral order—which, it turns out, can be embodied visually through hybridity. Darina Karpov’s ambivalent manifestations of waywardness split the difference between Wolfgang Kayser’s conception of the grotesque as an evocation of a demonic, alienated world, and Mikhail Bakhtin’s as the joy that accompanies freedom from constrictive boundaries, however fleeting.

Sean McCarthy is an artist who lives and works in Brooklyn, New York. He is represented by Fredericks & Freiser, and is currently Assistant Professor of Art at Lehman College, CUNY.

This will be Karpov’s third exhibition at Pierogi. She was born in St. Petersburg, Russia and currently lives and works in Brooklyn, NY. She studied fine art in Russia before moving to the US where she received her MFA from Yale University and BFA from the Maryland Institute College of Art.
www.pierogi2000.com