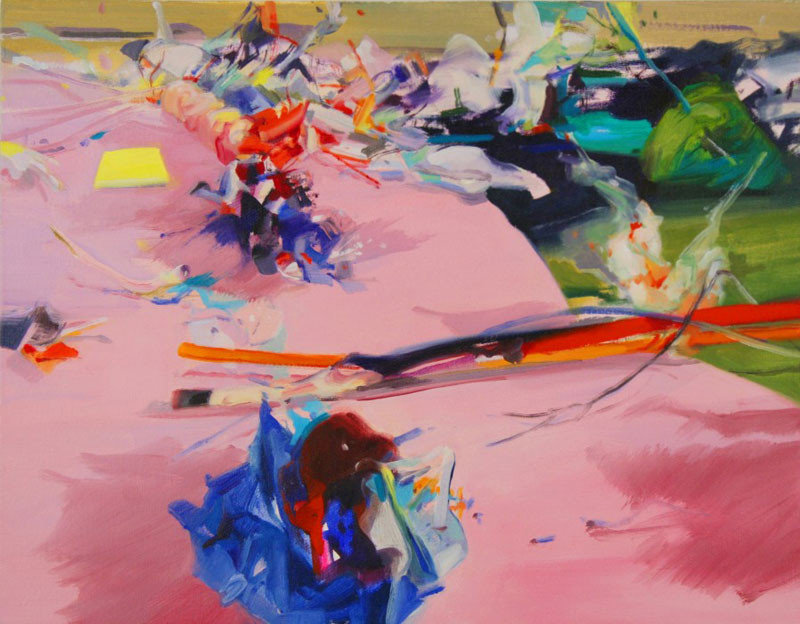 Pierogi is pleased to present an exhibition of recent paintings and works on paper by Darina Karpov. As her exhibition title suggests, Karpov’s focus here is on interiority, both literal and metaphorical. First, the work points to a physical location, the place where it originates, the artist’s studio. This is of course a double entendre, the other meaning being what Karpov refers to as rendering “the physical world of her imagination.”

“I see my workspace as the site of ongoing transformation, and regeneration. A place where scraps of old drawings, or paint scraped from the palette can suddenly awaken into shapes and transform into a live presence.... This is a state of emergence — the summation of all the failure, ruin and detritus of my process — that I transform into the pictorial presence. It’s like picking up broken pieces and making them whole again.”

Karpov creates miniature table-top and floor arrangements from the detritus in her studio in order to jump start the painting process. The original image, used as a springboard into a deeper space of imagination, is ultimately abandoned in order to engage more directly in a dialogue with the paint itself. She develops the surface using texture, layering, and transparency, while the imagery depicts objects coming into shape and dissolving into the materiality of the medium. These paintings convey moments of congealed activity, where elements and objects coalesce temporarily, before dissolving again or zooming off in their original trajectory. They are more about the drama of an obscure event than a static landscape.

Over the past several years Karpov has shifted the focus of her painting practice from acrylic, watercolor and gouache on panel, to oil on canvas. Her imagery continues to oscillate between abstraction and figuration. Seen from a distance, the paintings appear as abstractions in motion, and upon closer inspection recognizable objects begin to take shape. This change in medium, along with the use of studio maquettes, has altered much else, however, such as moving from a highly detailed vocabulary to a looser hand and exploded imagery.

Karpov is interested in the work of many visual artists, both historical and contemporary, especially Symbolists such as Mikhail Vrubel, Pavel Tchelitchew, and James Ensor. As a young artist she was immersed in the Russian history of miniatures, children’s book illustration, and costume design for the Ballet Russe. The Hermitage Museum in St. Petersburg was her second home as a child. However, her inspiration comes at least equally, if not more so, from writers, poets, and filmmakers; from the films of Andrei Tarkovski to the French new novel. The title of one painting in this exhibition, “Life In the Folds,” comes from a collection of poems by Henri Michaux, and she relates deeply to the kind of immersive, interior exploration that Michaux’s work exemplifies.

This will be Karpov’s fourth solo exhibition at Pierogi. She was born in St. Petersburg, Russia and currently lives and works in Brooklyn, NY. She studied fine art in St. Petersburg before moving to the US where she received her MFA from Yale University and BFA from the Maryland Institute College of Art.
www.pierogi2000.com