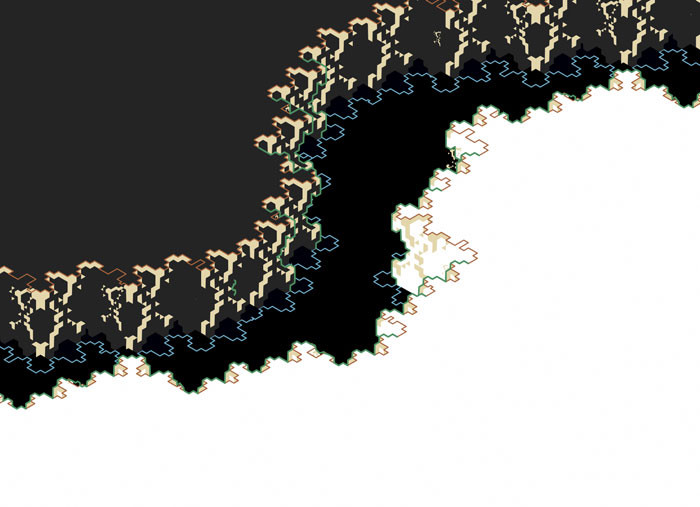 Pierogi is pleased to present a multi-media exhibition by David Brody, “8 Ecstasies,” at The Boiler. The installation will be a setting for the projection of a new 11-minute, high definition, computer-animated film of the same name, with a sound score by Zig Gron. Although completely digital, “8 Ecstasies” derives from drawing. In 2007 Brody began modeling, in a 3-D animation environment, a geometric figure first elaborated in studies on isometric graph paper. He then set the interlocking, morphable array in motion according to rhythmic breathing, using a one-minute sound score collaged from internet pornography. In 2012 he sent the animation and sound to Gron in Los Angeles and “...asked for a set of variations in which the rhythms and timing of the original sound source would reiterate in each variation. My idea was to loop the one-minute animation cycle, keeping its sense of precise correspondence even as the sound went through a series of changes.” The two worked back and forth for more than a year, developing the sound-image collaboration, with Brody responding to Gron’s expansive score by abandoning the idea of strict repetition, adding new animation, color development, and (virtual) camera movement, though retaining the underlying premise of a looping animation cycle. Each of Brody’s prior animations have also been concerned with uncanny correspondences between sound and image, beginning with “Beethoven Machinery” (1989), which attempts to visualize the structure of a quartet movement.

The film “8 Ecstasies” begins with a quotation from Teresa of Ávila, and the installation is inspired by the Baroque theatricality of Bernini’s Cornaro Chapel, the setting for his most idiosyncratic sculpture, “The Ecstasy of St. Teresa.” Between showings of the film the darkened space of The Boiler will come to life with projections and illuminations relating to the animation, including isometric glow-in-the-dark tape drawings on bubble wrap and a hanging sculpture made of 500 four-inch foam rubber cubes, which will slowly become visible. This will be Brody’s fourth solo show with Pierogi / The Boiler.

The exhibition will include another collaborative project, with the poet and memoirist Nick Flynn (Some Ether, Another Bullshit Night in Suck City, The Reenactments). Flynn has written a poem – “[salvaged process notes for david brody’s 8 ecstasies]” – using fragments from Brody’s notes recording the technical progress of the animation over several years. The poem will be published in newspaper format (designed by Adam Robinson) alongside excerpts of the notes and reproductions of drawings Brody made in relation to “8 Ecstasies.”

Brody’s animations have been exhibited at The National Gallery of Art in Washington, The Museum of Modern, NYC, The Reina Sofia Museum, the Centre Pomidou, and the Drawing Center. He is also a painter, with recent solo exhibitions at Pierogi and Sometimes Works of Art. He writes for Artcritical.com, Bomb Magazine, The Brooklyn Rail, and Cabinet.