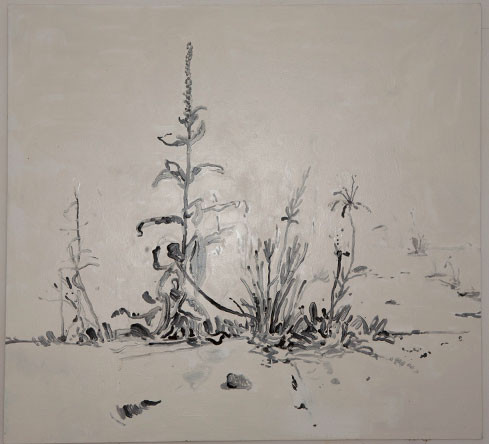 At the edge of the paper, non-paper. At the edge of sense, non-sense. In David Scher’s new work he continues the development of a personal vernacular in tangible form; a development that began when he drew his first sketchbook at only three years old. Drawing comes as naturally to him as hammering nails. “As the universe does not have an idea, neither do these paintings. Why establish a stopover between oblivions ?” (Scher 2010)

Words that come to mind when thinking of Scher’s work include, but are not limited to, humorous, ingenious, prodigious, and multifarious, biting, generous, and inimitable. Each drawing and painting is a world unto itself, while a language of figures, exquisite line, and mark-making link one to the next. In each of these worlds there is a provocative sense to Scher’s non-sense. Bugs, creatures, flyswatters, three-legged figures, and odd men and women populate his imagery. “My...approach consists of establishing fields where multiple things occur in proximity. These are familiar fields, including walls, tabletops, stages, shores, and pages. My work is composed within these constructs using diverse mediums and instruments as the subject demands.”

This is Scher’s fourth exhibition with Pierogi; his first in 1995 was his first one-person show in New York. This exhibition includes drawings, paintings, poems, music and sculpture. One of the sculptures is a kiosk topped by a ceramic head, a Faro. “The Faro does not so much light the way as he is dimly lit; he is looked at and looks out; there is no way. His head is hollow yet filled with light.”

Books, sketchbooks, and text figure prominently in Scher’s body of work and this exhibition also includes drawings and paintings of opened books. Books that invite multiple readings, as tributes to the book, frames of encouragement, fertile book cracks; their pages are textural, notational and suggestive.

A unique element to this exhibition will be a group of 100 works-including drawings, small paintings, and photo works-available in sealed envelopes priced at $200 each. A list of titles will be available to assist in selection, among them, The moon crab knits a beach for Poppa Wints and None but Rogers and Crabbe are free, was another answer.

Scher’s work has been exhibited extensively in the US, Mexico, and Europe and is included in the permanent collection of The Museum of Modern Art (NYC) among others.