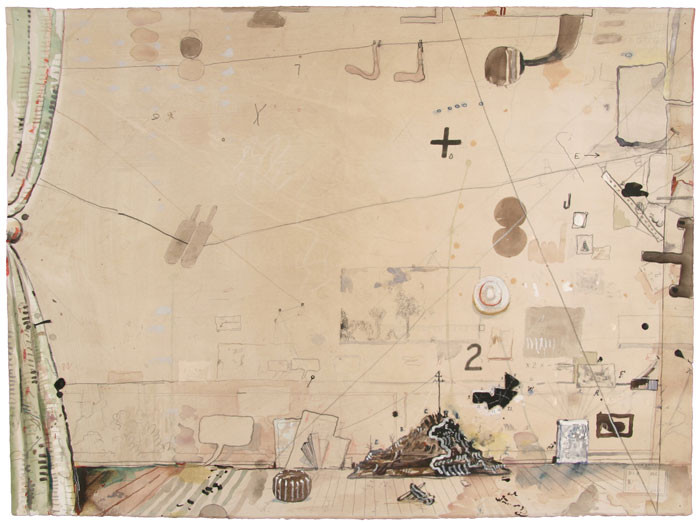 “Not Virginia Woolf’s last novel, no, the little cigars we smoked in high school.” (Scher, 2011)
This is an exhibition of new drawings by David Scher made after living in Marseille, France over the past year. Scher’s previous exhibition at Pierogi included a group of drawings and paintings relating to books, sketchbooks, and text, all of which figure prominently in his work. The eleven drawings in this new suite are connected by their inclusion of letters and imagery...”tired of being spoken to? Look at these drawings. Letters hover waiting assignment. Books are where letters clam up.” (Scher, 2011) As suggested by his cryptic text, letters wander through these drawings, converging in a corner of one, creating a circular formation in another and, in yet another, a square volume suggesting the walls of a room expanding into the distance. Throughout, figures hover in the background and between the letters.
Of a recent Paris exhibition, Philippe Dagen notes, “He injects, discreetly or overtly, a bit of absurdity into the most conventional artistic genres. Callot, Bosch, Ensor, Ernst: one could multiply the references, but Scher, if he is their young cousin, has his own particular—and delectable—way.” (Dagen, le Monde, 2011)
Scher’s work has been exhibited widely in the US, Mexico, and Europe and is included in the permanent collection of The Museum of Modern Art (NYC), among others. This will be his fourth solo exhibition at Pierogi.
www.pierogi2000.com