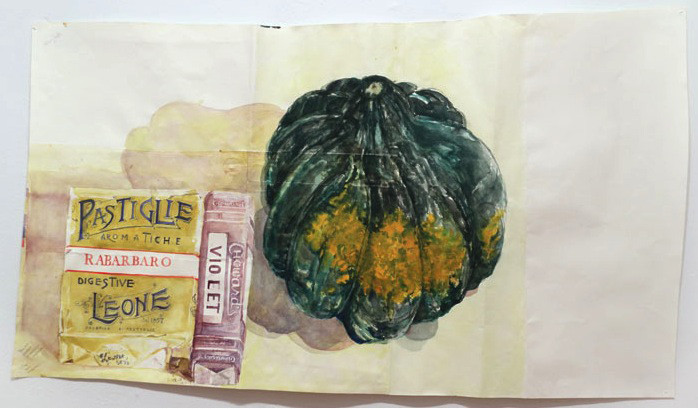 Pierogi is pleased to present an exhibition of recent work by Dawn Clements. In addition to continuing to explore the subject of domesticity, Clements takes on sentimentality. This new body of work includes paintings on paper of aging floral and still life arrangements on her kitchen table. Clements’ signature glued, folded and distressed paper, gives the work an almost sculptural quality. This and her use of scale, endow these works with a heft and depth of feeling that is remarkable.

“After some years involving much travel away from home, I took this past year to be home, reflect and work. This work took me back to my living space, particularly the kitchen table. I count my days through my work. The past seven-and-a-half years of my life have involved love, loss, and change. Thoughts of passing days, people, gestures and the often overlooked objects of daily life has driven my work in a sentimental direction, many in the form of watercolor flower works.” (Clements, 2015)

In addition to a renewed focus on her domestic space, Clements has also made a return to color. This exhibition will include large and medium-scale works on paper: in Gallery one, primarily large watercolor paintings of Clements’ year in her kitchen, such as “Peonies”, “Chrysanthemums,” and “Hyacinth, Camellia, and Sugar Egg.” On view in Gallery two will be several black and white works including a large ballpoint pen drawing of a woman in her bedroom from Raffaello Mattarazzo’s film “L’angelo bianco” (1955) and a drawing of the library at Civitella Ranieri Foundation in Umbertide, Italy.

This will be Dawn Clements’ sixth one-person exhibition at Pierogi. Her work is currently on exhibit at Bates College Museum of Art (“Back and Forth: the collaborative works of Dawn Clements and Marc Leuthold”), and has been included in numerous exhibitions including: “Paper” (Saatchi Gallery, London), “Ghost of Architecture” (Henry Art Gallery, Seattle), “Ballpoint Pen Drawing Since 1950” (Aldrich Contemporary, CT), “Making Room: The Space Between Two and Three Dimensions” (MassMoCA), “11th National Drawing Invitational: New York, Singular Drawings” (Arkansas Arts Center), “Contemporary American Drawing” (Xiang Art Museum, Sheng Zheng, China), and the Whitney Biennial 2010 (Whitney Museum of American Art, NY). Her works are included in the permanent collections of The Museum of Modern Art (NYC), Whitney Museum of American Art (NYC), Brown University, The Tang Museum, the Deutsche Bank Collection, among others. Clements received an MFA from the State University of New York at Albany and a BA from Brown University. She lives and works in Brooklyn, New York.
www.pierogi2000.com