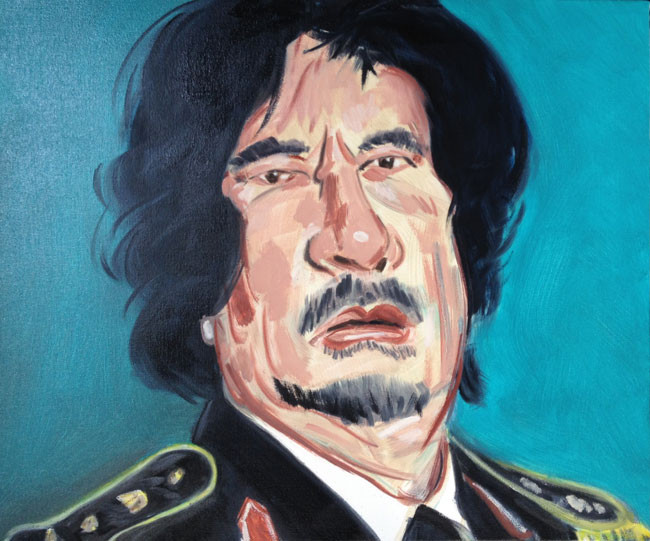 A multi-platform exhibition, The GROSSMALERMAN Show! will consist of a gallery installation of the stage-set of Grossmalerman’s painting studio upon which five episodes of the sitcom The GROSSMALERMAN Show! will be filmed. Episode 1 will be shot with multiple cameras in front of a live studio audience, as classic sitcoms were, on the evening of September 26th (filming from 6:45-8pm by invitation, followed by a public opening reception from 8-10pm). The episodes will be edited and posted on-line during the exhibition and the continuously changing stage set can be explored by gallery goers between shoots during gallery hours.

In the series, the artist Jonathan Grossmalerman, a once successful painter in a serious career slump has been offered an exhibition at his dream gallery...but there’s a catch! He can’t show any of the incredibly explicit paintings that helped make his name. All that pressure would be enough to send any artist into a full-fledged creative crisis! But Grossmalerman still has to contend with the haunted Basquiat painting his girlfriend just dragged home, his estranged eleven year old daughter who just moved in, and the studio assistant’s poor book keeping which sets off a violent string of events that include but are not limited to, an assassin, a spit take, and a very angry collector.

Each week there will be changes to the set as the story arc of the series progresses. Paintings will be changed out with each episode as Grossmalerman takes a stab at a new subject matter and Basquiat’s angry ghost wreaks further havoc on the zany characters that populate The GROSSMALERMAN Show!

Smit and White originally met in 1999 when Smit helped with Michael Smith and White’s collaboration, “Open House,” at the New Museum. They developed a mutual fondness and have subsequently been included in numerous group exhibitions together. Recently, Smit approached White for advice when a British production company began developing Grossmalerman! for television. After the production deal fell apart, Smit approached White again, now with a new proposal: reimagining the show as a classic sitcom, art exhibition, and performance built on the premise that contemporary art, always on the vanguard, had skipped tragedy and gone straight to farce

Born and raised in New York City, Guy Richards Smit is a video artist, performer, musician and painter whose work has been seen at biennials in Havana, Valencia, ARCOMadrid, and Dublin Contemporary. He has had solo exhibitions at Schroeder Romero & Shredder, Fred [London] Ltd, Roebling Hall, and TEAM. In 2004 the Museum of Modern Art included his video rock opera Nausea 2 in their Premier Series to celebrate the museum’s reopening, as well as touring and performing internationally with his band Maxi Geil! & Playcolt. In October 2013, The New York Times Art Critic Roberta Smith wrote that his most recent project was “A tour de force that showcases his considerable talents for satire, stand-up, endurance art, and painting.” He currently writes a monthly column as Grossmalerman for the British magazine ArtReview which will publish a book of his collected columns through their imprint later this year.

Born and raised in New York City, Joshua White is an artist and video maker. In 1967, he formed The Joshua Light Show, a performing ensemble creating live improvised psychedelic imagery behind all the great rock bands of the day. Eventually, The Joshua Light Show found a permanent home at Bill Graham’s Fillmore East. After perfoming at the Woodstock Festival Joshua left light shows behind to pursue his new interest, giant screen video projection for large arenas. Soon, broadcast television discovered the potential of rock. Joshua segued over to that medium and began a thirty year career as a TV director. His credits include Seinfeld, The Jerry Lewis Telethon, The Max Headroom Show, Club MTV, The New Mickey Mouse Club, and Inside The Actors Studio. Ten years ago, Joshua re-generated light show collaborations with Gary Panter. Over the last 15 years, he made many other art projects and installations, six of them in New York, Austin, and Philadelphia with performance artist Michael Smith. His work has been seen at The Museum of Contemporary Art, Los Angeles, The Hirshhorn Museum, Whitney Museum of American Art, The New Museum, Centre Pompidou, Hayden Planetarium in NY, Barbican Centre in London, Basel Switzerland and Basel Miami and most recently, The Cleveland Museum of Art. In October, Joshua Light Show will return to NYU’s Skirball Center for a second week-long residency.
www.pierogi2000.com