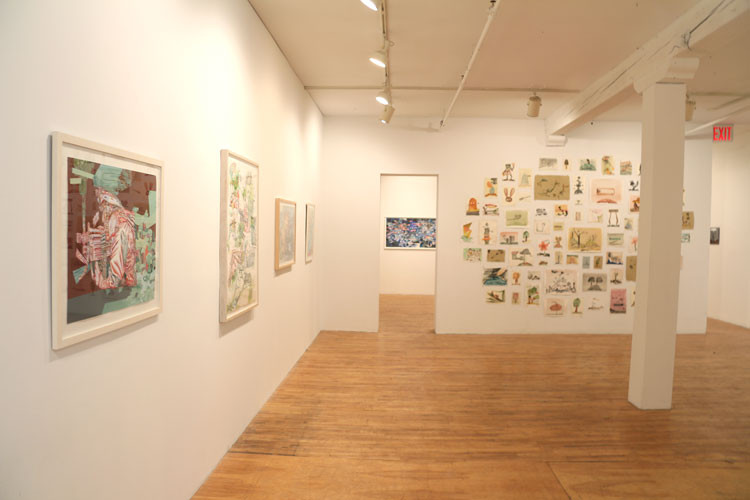 Id•i•om (noun)
•an expression that cannot be understood from the meanings of its individual words but that has a separate meaning of its own
•a form of language that is spoken in a particular area and that uses some of its own words, grammar, and pronunciations
•a style or form of expression that is characteristic of a particular person, type of art, etc.

Pierogi is pleased to present Idiom I and Idiom II, two consecutive exhibitions, each including work having a related visual language. “Idiom” typically refers to the written word, meaning either, a characteristic vocabulary or usage of a particular group or, an expression whose meaning as a whole is not inferred by the typical meanings of the individual words making up the phrase. In other words, when combined the individual parts create something unexpected, such as “the devil’s in the details” or “waste not want not.“ In this case it is a visual language and transformance which is referenced.

Idiom I is developed around the concept of “willing suspension of disbelief,“ the notion proposed in 1817 by the poet and aesthetic philosopher Samuel Taylor Coleridge. He suggested that if a writer could infuse a “human interest and a semblance of truth” into a fantastic tale, the reader would suspend judgment concerning the implausibility of the narrative. Each of these artists’ takes on this notion in their own idiosyncratic manner. There is a sense of suggested narrative which is nonethless implausible.

Idiom II will include the work of Justin Amrhein, Beth Campbell, Jonathan Herder, Mark Lombardi, William Powhida, and Ward Shelley. The exhibition dates will be 14 February through 16 March, 2014, with an opening on Friday, 14 February (7-9pm).
www.pierogi2000.com