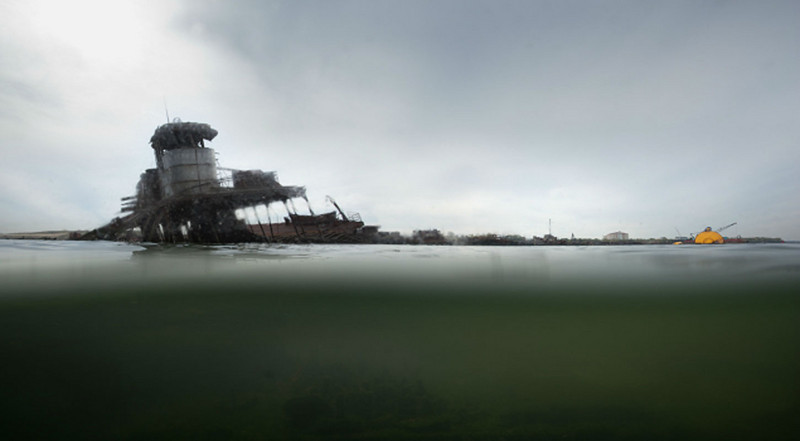 Pierogi is pleased to present an exhibition of large-scale photographs and a video by Canadian artist Isabelle Hayeur, as part of the Brooklyn Montréal exchange organized between eight Brooklyn and eight Canadian galleries and institutions.

Hayeur is known primarily for her large-scale photomontages, videos, and site-specific installations. After initially focusing on video works, Hayeur incorporated photography in 2008. The works in this exhibition are from an on-going project initiated at that time, while the artist was staying in the watery environs of southern Florida. Rather than focus on seductive tropical waters, Hayeur chose to leave the “crystal-clear waters to vacationers,” preferring “to capture the turbid waters of navigation canals.”

“This inquiry has its point of departure in a personal experience. For over twenty years, I have lived by the shores of a river that has become very polluted. I have long been observing the transformations of this stream, the changes in its ecosystems as well as the disappearance of some of the animal species that used to live in it. I wished to create a body of work that would bear witness to these man-made upheavals.”

“The aquatic landscapes I probe have been considerably altered. They are sometimes actual deserts where nothing is left to see. The images I capture bear witness to this absence. I have observed dying ecosystems near New Jersey’s Chemical Coast and the marine cemetery of Rossville (Staten Island), where the shortage of dissolved oxygen is making life precarious. These desolate expanses are sometimes suffused in a wavering light endowing them with a strange, disturbing beauty. I photograph them from an unfamiliar vantage point, eschewing capture from shoulder height. These views from the inside create a relation of closeness between the onlooker and the site being documented. They take us closer to these environments by plunging us in their midst, as it were.” (From an interview in NMP, Nov/ Dec 2011)

Hayeur holds a Bachelor’s (1997) and a Master’s (2002) degree in Fine Arts from the Université du Québec à Montréal. Her works have been widely exhibited throughout Canada, Europe and the United States, as well as in Mexico, South America, and Japan, in exhibitions at The National Gallery of Canada, the Massachusetts Museum of Contemporary Arts, the Neuer Berliner Kunstverein in Berlin, Akbank Sanat in Instanbul, among others. Her works are included in numerous permanent collections, including the National Gallery of Canada, Fonds national d’art contemporain in Paris, Art Gallery of Ontario, Vancouver Art Gallery, Musée d’art contemporain de Montréal, and the Museum of Contemporary Photography Chicago.
www.pierogi2000.com