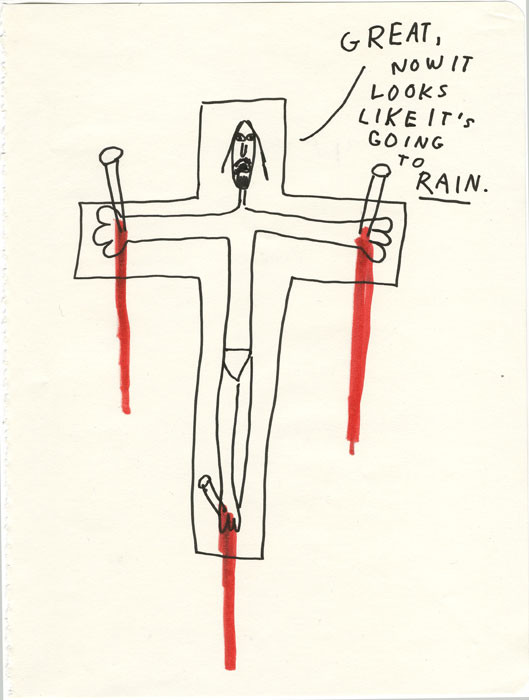 Pierogi is pleased to present an exhibition of Jim Torok’s recent Jesus series. These are spare, small-scale ink and colored pencil line drawings depicting Jesus on the cross, each with its own text. Contrary to possible knee-jerk reactions, Torok’s purpose in this body of work is not to offend. Rather, he notes “I really like Jesus. Jesus is an icon for everyone.” This work is Torok’s whimsical attempt to make Jesus manifest, to allow himself and others to identify and empathize with Jesus on the cross, as a metaphor for the idea of God having created his own son of flesh and blood to absolve us of our sins.

Torok’s texts include, “I’m sorry, but I am just having doubts about all of this,” “You looking at me?” “At least I am famous,” “Please don’t facebook this” and, “This is in no way a comment about the church.”

Torok is also tapping into a tradition of artwork delving into the imagery, history, and ideas of Catholicism by artists such as Andres Serrano, Chris Ofili, Kiki Smith, David Wojnarowicz, among others. Like these artists, Torok was raised Catholic. This upbringing left him with conflicting questions and doubts. When he began this series he felt as if he had “tapped a vein and it all just came out.” The drawings became a perfect format for him to express all of his concerns.

Of interest to Torok is that while politicians and self-appointed, so-called morality defenders loudly decry any artwork incorporating religious imagery and ideas (without any meaningful examination of the artwork), the Catholic Church itself does not condemn such works. This is because the teachings of Catholicism stress, reasonably, that a representation of something is not the same as the thing itself. In her book, Postmodern Heretics: Catholic Imagination in Contemporary Art, Eleanor Heartney suggests to “[c]ontrast this with the literalism of Protestant Fundamentalists, for whom symbols and representations are indistinguishable from the things to which they refer. It was such literalism which contributed to the controversy around ‘Piss Christ’ in which politicians and members of the Christian Right seemed unable, or unwilling, to distinguish between a plastic crucifix and Christ the savior.... It is telling that Serrano’s work, even at its most provocative, was never condemned by the Catholic Church. In fact, during an interview with a highly placed church official, Serrano was informed that ‘Piss Christ’ presented less of a problem than his more abstract ejaculation photographs which ran counter to Church interdictions about the unnecessary ‘spilling of seed.’”

This will be Jim Torok’s fourth one-person exhibition at Pierogi. Torok’s work has been shown widely in exhibitions such as “Portraiture Now: Communities,” a three-person exhibition at The National Portrait Gallery, Washington, DC, “The Lens and the Mirror: Self-Portraits from the Collection, 1957-2007” (The Metropolitan Museum of Art, NYC), “Attention to Detail,” (The FLAG Art Foundation, NYC, Curated by Chuck Close), among others. His work is included in the permanent collections of The Museum of Modern Art (New York, NY), the Metropolitan Museum of Art (New York, NY), and others. He received an MFA from Brooklyn College and currently lives and works in Brooklyn, NY.
www.pierogi2000.com