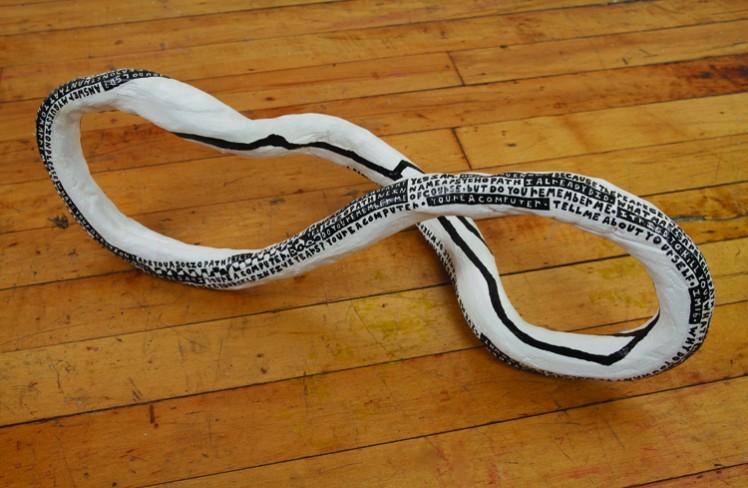 “John O’Connor seems to simultaneously occupy three divergent positions. He is a statistician crunching numbers, a satirist working in the mode of Jonathan Swift, and an occultist trying to divine the messages hidden in the stuff of everyday life. His work brings together dry, unrelenting logic, a sharp eye for human foibles, and a variety of means for unlocking the secret knowledge in the mundane.” (John Yau, 2013)

Pierogi is pleased to present an exhibition of John O’Connor’s recent work. A single word in the title of this exhibition is telling – and. For O’Connor it is not a question of mental or physical activity, mind or body, content or form. Each is integrally bound to the other, one affecting and shaping the other and vice-versa.

This exhibition will include O’Connor’s recent graphite and colored pencil drawings on paper (both large and small-scale), a series of “Sunspot” portraits, text paintings, and sculptural works. One drawing, Portrait of a Pyschopath, juxtaposes two lists: one indicating general psychopathic characteristics, the other the names of the most evil leaders throughout history and the most successful US presidents (the qualities that make a successful leader are often psychotic in nature). It “...serves as a kind of flow chart of the type of consciousness that engenders such play. That is to say, a naturally fecund imagination that enjoys access to preternatural if not frankly ‘unnatural’ ....latitudes of awareness.” (Robert Storr)

Several works, including Butterfly and the Sunspot portraits, address large and powerful systems exerting outside influence on the subject. Butterfly deals with corporate product development, and subsequent image manipulation through advertising, as a system that influences our decision-making process affecting how we behave, choose, and even look. We have the illusion of choice and freedom but our decisions are in many ways Pavlovian, in that we may not have a clear understanding of how our choices are often reactions to previous stimuli. “The butterfly effect here is where a small action or choice eventually spirals into a much more chaotic pattern of events.” The Sunspot portraits are self-portraits over which O’Connor has superimposed dark spots lifted from imagery of activity on the sun’s surface and are an example of natural forces affecting the subject. Here it is the “...sun’s surface fluctuations that affect the surface of my face. I thought of these as a self-documentation of a transformation, like The Metamorphosis or The Fly.” (O’Connor)

For Cleverbot II, O’Connor asks a chatbot (a computer designed to respond as humanly as possible) questions and incorporates the responses into this text work. In two diptych paintings, Love Letters and Ego Letters, O’Connor appropriates “Dear John” spam letters he received which appear to be written by a computer attempting to seem human, and creates his own responses to the computer-generated texts. As Rick Moody notes, “[t]here is...a hand-made quality to the work... which means that John only likes machines and digital interfaces if they fail, and so he often writes out words in his paintings, and then mismatches bits of them...”

This will be O’Connor’s fifth one-person exhibition at Pierogi. His works are included in the permanent collections of The Museum of Modern Art (NYC), Whitney Museum of American Art (NYC), among others. His work is currently on view at the Tang Museum in an exhibition titled, “Classless Society,” (Saratoga Springs, NY). O’Connor received an MFA from Pratt Institute and studied at Skowhegan School of Painting and Sculpture.
www.pierogi2000.com