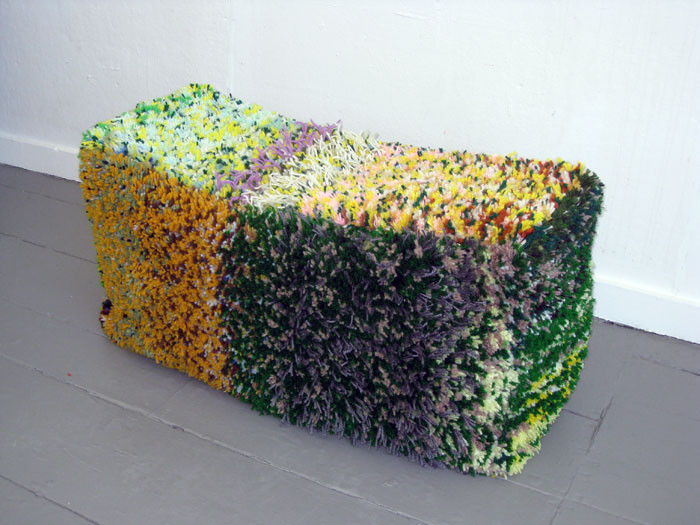 Larry Krone’s work has been described as “an expression of manufactured pop emotion taken seriously” by Holland Cotter. In Larry Krone: Together Again, the artist goes beyond expressing these borrowed emotions and infiltrates the culture of the objects, music, and traditions closest to him in order to take advantage of their immediate access to our hearts. In this, Larry Krone manages to manufacture some emotion of his very own.

The centerpiece of this exhibition is “Then and Now (Cape Collaboration).” Krone spent two-and-a-half years on this monument to individuality and the complexities of human identity. It is a glittering, floor-length cape, fully embroidered and encrusted with hand-sewn sequins, not an inch of its surface left unadorned by intricate handiwork. The cape is made from hundreds of individual pieces of embroidery and needlework of various themes, styles, and qualities of workmanship culled by Krone from thrift stores and donors for years before he began patching them together as one would individual pelts for a fur coat. As a gesture of collaboration, and a testament to the preciousness and beauty of each individual element of the cape, Krone finished it by applying the sequins one-by-one to fill in every area of fabric left unadorned by the original craftspeople.

Together Again also includes wall hangings such as “Then and Now (Indian, Owl, Clown, Duck, Chicken)” which are extensions of the cape, using patched found embroideries and Krone’s meticulous sequin technique, while earlier pieces from the series, such as “Then and Now (Rainbow Order),” are simpler geometric abstractions created from combinations of found God’s-eyes and crocheted potholders, placemats, and granny squares. Krone’s “Then and Now (Hay Bales)” are life-sized sculptures of hay bales, made from found remnants of yarn left over from others’ projects, intricately latch-hooked into impressionistic patterns in colors as close to those of hay that Krone could achieve given the limitations of his yarn selection.

Ironically, despite the collaborative content in his work, the obsessive nature of Krone’s process left him feeling somewhat isolated over the past few years. The exhibition title, borrowed from a Buck Owens song, expresses his feeling of being Together Again now that he is exhibiting it.

“Krone’s early sculptures and drawings incorporated corporeal elements such as hair and teeth; [now] he has added soul.” —Bradley Rubenstein

This will be Larry Krone’s first one-person exhibition at Pierogi. Born in Chicago, IL in 1970, Krone was raised in St. Louis, MO and now lives and works in New York City. He has been exhibiting his drawings, sculptures, installations, and videos since the early 1990s at galleries and museums including The Whitney Museum of American Art Philip Morris Branch and the Contemporary Art Museum St. Louis which, in 2006 presented “Larry Krone: Artist/Entertainer,” a ten-year retrospective of his visual and performance work. As a performer, Krone has appeared at music and art venues in New York including Joe’s Pub, PS 122, and the Whitney. Krone’s costume design and fabrication for his own performances has led to the creation of House of Larréon, his line of custom gowns and stage costumes, outfitting cabaret performers, dancers and rock singers including Bridget Everett, Neal Medlyn, Adrienne Truscott, and Kathleen Hanna. Larry is a 2013 Millay Colony fellow, a 2011 and 2012 MacDowell Colony fellow and a New York Foundation for the Arts 2009 fellow.