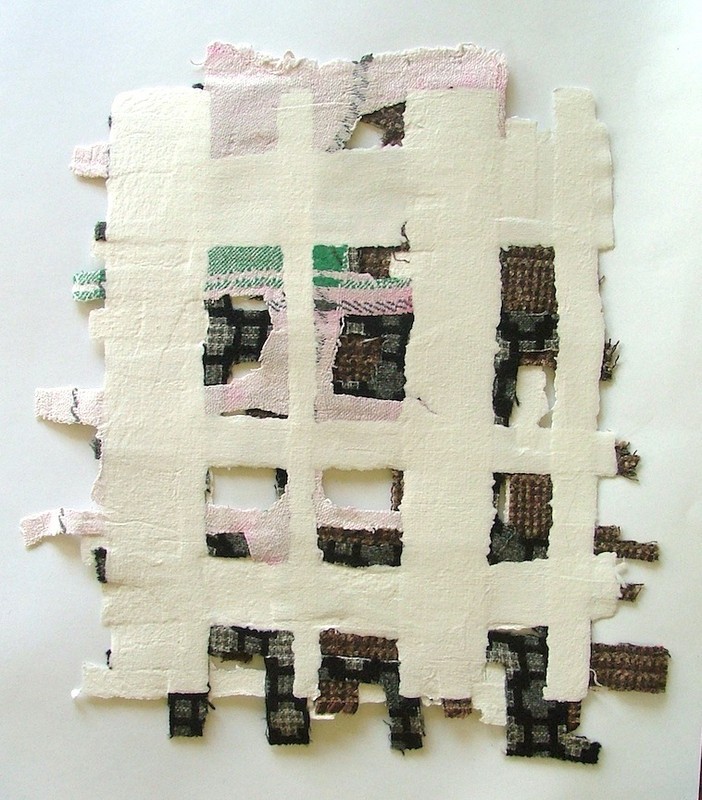 The Boiler (Pierogi) is pleased to present a two-person exhibition of work by Linda Herritt and Elana Herzog. Each artist will present one large-scale site-specific work at The Boiler.

Linda Herritt makes text-based wall installations constructed of common materials such as tape, yarn, bits of fabric, and chain. The work uses a grid derived from digital wireframe images—found or created—as the architecture supporting short passages of text. The text lists aspects of a specific cultural context, creating an overall field that reveals patterns or attitudes. Subjects range from a listing of bands or a compendium of traditional Chinese brushstrokes, to a collection of prescription drug side effects. The scraps of material used to build the piece often act as stand-ins for drawing materials and techniques, like crosshatching.

For this exhibition, Herritt bases a wall installation on Robert Smithson’s 1966 drawing, “Heap of Language.” Smithson wrote his heap on a sheet of gridded paper; Herritt uses a wireframe grid mapping a mountain in Colorado as her structure. Built of tape, fabric, chains, and yarn, the mountain hugs the wall, folds into a corner, and spills onto the floor. The tension between viewing and reading becomes apparent as one processes simultaneously the knitted web-like skin of the surface and the linear, left to right orientation of the text. Populating the gridded mountain with a listing of bands performing on two nights in Brooklyn, Herritt creates a double map with opposing timeframes: one geological, the other cultural. The text, overlaid onto the warped grid, while recognizable, becomes nearly unreadable and confounds expectations of legibility and of language making sense.

Over the last two decades, Elana Herzog has been the subject of museum surveys and solo exhibitions in over twenty cities in the U.S. and Europe. “Valence” is one of her single most ambitious projects to date. It was begun during a residency at the Josef and Anni Albers Foundation in which the artist immersed herself in the legacy of the Bauhaus. “I’m particularly inspired by intrepid Anni Albers, who expressed so much through textile design and weaving,” says Herzog. “She made the most of what she had, at a time when other more ‘fine-art’ related materials were off limits due to her gender.”

Here, Herzog engages the cavernous space of The Boiler with two fabric-embedded surfaces of varying dimensions (each roughly 17 x 17 feet)—one a warmer feeling, scrap-wood surface, the other a cooler, white sheet rock (one of the artist’s signature materials). The former is supported by steel shelving posts and leans against the massive brick wall near this industrial space’s eponymous defunct boiler; the latter is mounted directly to the surface of the brick. As one surface overlaps another on a scale almost two stories high, newly inter-woven solid surface areas become obscured—while other, unexpected, pre-existing architectural rhythms are revealed. The level of risk and play and formal rigor involved—on such a grand scale—is testament to Herzog’s familiarity with engaging pre-existing architecture. Herzog learned, only shortly before installation, that the Boiler, itself, was used to heat water for dying fabrics and dates back to 1934.

To better implement this abstract mise-en-scene on such a large scale, the artist first plotted out individual sections in AutoCad, fabricated them in her studio, and later transferred them (with a week’s worth of hands on labor) on to the site. As a result, virtual and physical labor become indistinguishable in this intersection of soft (pink) textile, industrial hardware (areas of metal that are several stories high), and 1,600 square feet of terra-cotta brick.

Linda Herritt lives and works in Brooklyn, NY. Her installations and drawings have been included in exhibitions in numerous galleries and institutions in the US, Mexico, and Europe, including the San Francisco Art Institute (SF, CA), the Drawing Center (NY, NY), Museum of Contemporary Art, Denver (CO), Arti et Amicitiae and 1K Project Space (Amsterdam, The Netherlands), among others. She is the recipient of a Pollock-Krasner Foundation Grant, a Rockefeller Foundation Grant, and a NEA Sculpture Fellowship. She participated in the International Artist in Residence Program in Vienna, with US residencies at Yaddo, the MacDowell Colony, Art/Omi, and the Marie Walsh Sharpe New York Studio Program.

Elana Herzog lives and works in New York City. Her work has been the subject of numerous museum and gallery exhibitions, included “De-Warped and Un-Weft,” a survey of Herzog’s work since 1993, at the Daum Museum of Contemporary Art in Missouri in 2009; the Aldrich Museum of Contemporary Art (CT); Smack Mellon (Brooklyn, NY); the Herbert F. Johnson Museum at Cornell University (Ithaca, NY). Herzog has been awarded residencies at the Josef and Annie Albers Foundation (CT), the Gertrude Contemporary (Melbourne, Australia), Farpath Foundation (Dijon, France), and the Marie Walsh Sharpe Space Program Residency (NY). Herzog has been awarded the Anonymous Was A Woman Award in 2009, the Louis Comfort Tiffany Award in 2007, and the NYFA Individual Artist?s Fellowship in 2007 and 1999. She currently teaches at Yale University.
www.pierogi2000.com