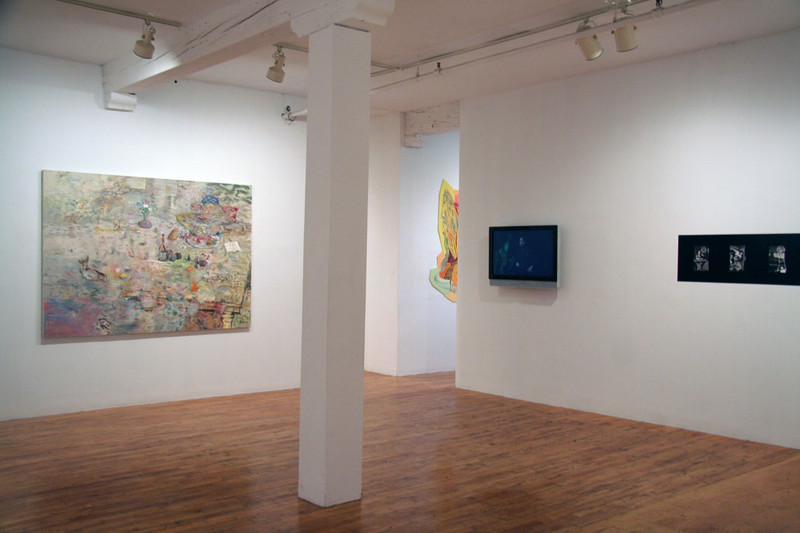 Modus Vivendi refers to “a way of life” or, alternatively, two parties “agreeing-to-disagree.” The artists in this exhibition, installed at both The Boiler and Pierogi, connect through multiple variations on this theme. Each has developed works involving a way of living, or proposes possibilities of agreeing to disagree.

On view at Pierogi, opening July 6th, will be the work of REED ANDERSON, NADJA BOURNONVILLE, HUGO CROSTHWAITE, DANIEL DAVIDSON, CHAN KOK HOOI, PATRICK JACOBS, MIRU KIM, DAVID SCHER, KENNETH SHORR, and JIM TOROK. Reed Anderson’s recent work includes elements that contrast process, image and color. After juxtaposing images blown up from auction catalogues and printed in black and white on large format paper, Reed applies colorful formal shapes to the composition creating a dialogue that is dynamic as well as poetic. Nadja Bournonville’s mysterious, small format photographs seem to force interaction. These works convey a strong sense of place interwoven with psychology. Hugo Crosthwaite makes intense and sometimes frightening figurative works that have a reality streaming from his own thoughts. Hugo was born in Tijuana, Mexico where he developed his vernacular in black and white. He draws primarily on paper and canvas with pencil and charcoal. His ability is to present a way of life that no one can experience in reality and yet which seems so familiar. In a series of drawings, Daniel Davidson develops a theme that he has studied for years, the duplicating or mirroring of a drawn image by overlaying images to create a reversed twin, a kind of visual palindrome. In this case, filling in the other half of a face as a mirrored image. These drawings / rubbings develop a complex relationship of imagery in which one half is dependent upon the other. Chan Kok Hooi’s drawings begin from a narrative motivation. He refers to the figures in these small works as “Carnivores.” Cars and human figures merge to form his Carnivores species, with characters engaged in a variety of scenarios ranging from whimsical to grotesque. Patrick Jacobs creates miniature realities in the form of dioramas viewed through a lens placed flush with the wall which depend upon the viewer’s ‘willing suspension of disbelief.’ The small worlds he creates are fully contained inside the wall so only the lens is visible from outside. They propose a reality that is both mystifying and magical. Miru Kim is an artist who pushes limits. This show will include a video of her performance, “The Pig That Therefore I Am,” along with several still photographs from this work. In this video Miru moves about naked amongst pigs in their pen, with all the interactions and filth exposed. “When they were looking at me, exposed before them, surrounded by them, I could not read their gazes, but they were somehow shockingly familiar. There was no language to bridge that disparity... But when I mingled with them with my skin, the gap momentarily closed in, as if I had forgotten my own language.” David Scher draws from the hip, so to speak; he is always testing the waters for new ideas and his large-scale painting included here is no exception. It depicts a style of living that is simultaneously lush and banal. “Fire and Forget,” by Kenneth Shorr, is a 45-minute video depicting multiple characters and insights that are disturbing and honest. It is a reality that can only come from an objective view of a subjective perspective. The activities occur in an Arizona border area with all the conclusions a bit twisted. Jim Torok’s notorious storyboard drawings will also be on view. Jim is able to express his experiences and thoughts in a style so direct that it is at times absurd but most often very funny.
www.pierogi2000.com