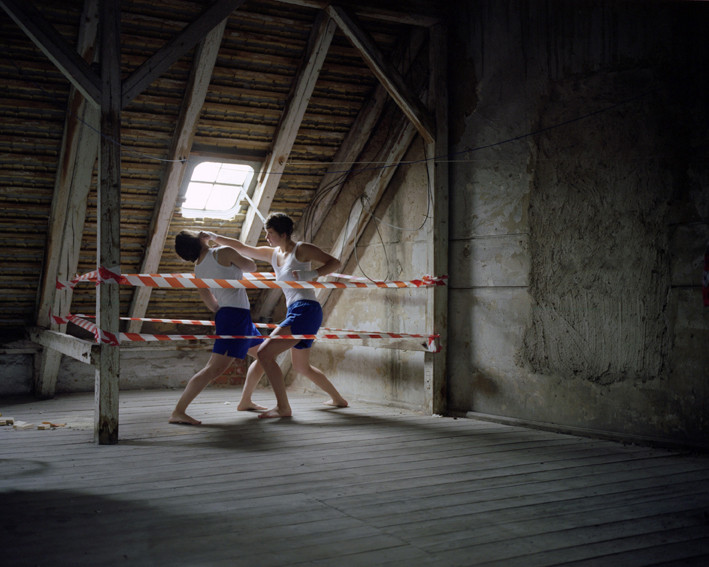 Pierogi is pleased to present the recent photographs of Nadja Bournonville in a series titled A Conversion Act. This new work developed from her exploration into the fascinating factory of Hysteria that existed at the Pitié-Salpêtrière Hospital in Paris at the end of the 19th century. Her previous work consisted of a three-part series—To be undone, Amor omnia vincit, and One for every wish—where Bournonville was “creating images from feelings, gestures and objects [and] the process became a way of relating to and internalizing the world...”

“At the Pitié-Salpêtrière Hospital in Paris Dr. Jean-Martin Charcot was reigning like an emperor over more then 4,000 female patients. The hysterical attacks at the Salpêtrière were unique since they always seemed to follow a pattern of four phases presented and diagnosed by Charcot. This pattern was meticulously documented through photography. The captivating images of the often young and pretty girls in hysterical attacks found their way out of the hospital and into history. Hysteria is still intriguing to us today although no longer a medical diagnoses in its own right but rather hidden under other names if, that is, it exists at all. This elusive disease turned into a starting point for me and opened up the possibility for the creation of an image world of photographs and drawings. What fascinated me was not so much the medical discussion but rather how hysteria seemed to become what was needed from it at the time, a constantly changing surface for projection and a reflection of the society with all its taboos and rules.” (Bournonville)

The project has resulted in exhibitions of 28 hand-printed analog c-prints, as well as the book ”A conversion act,” published by Austrian Fotohof edition, with texts by Karin Johannisson, Christina von Braun, and Dorothee Elmiger.

This will be Bournonville’s third one-person exhibition at Pierogi. She currently lives and works in Berlin, Germany. She received a BA from the Glasgow School of Art (Glasgow, UK) and MFA from the Hochschule für Grafik und Buchkunst, (Leipzig, Germany). Her work has been exhibited throughout Europe and Scandinavia. She recently received Sweden’s Maria Bonnier Dahlin Foundation Award and was awarded a residency and exhibition at IMMA (Irish Museum of Modern Art, Dublin).
www.pierogi2000.com