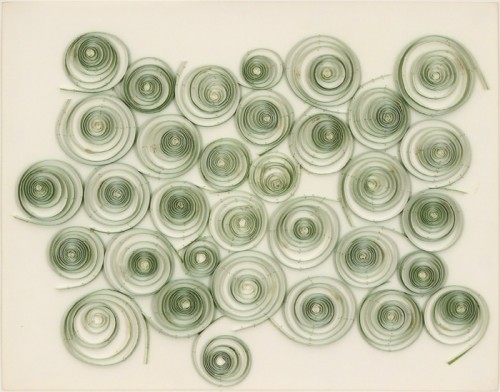 Pierogi is pleased to present Turkish born, New York based artist Sermin Kardestuncer’s third exhibition. Included will be works from Kardestuncer’s earth series. The earth series, which she began in the 1990‘s in Greece, was inspired by the exterior coloring of an old dome-shaped water cistern. She discovered that earth, when mixed with water and then applied to a surface in place of paint, was beautiful and more durable and porous than she had imagined it to be. So when she ran out of paint on a remote island she turned to earth. She takes great pleasure in using the most common materials that have little or no cost, always discovering new possibilities and renewed faith in them.

Kardestuncer’s abstractions recall the work of female minimalist artists of the 1960’s and 1970’s until one looks closer. Her integration of seductively worked materials produces nuanced compositions and the organic nature of her hand-work – in stitching, applying three-dimensional elements, and painting – creates her own vernacular.

Her process brings back a personal memory of place and history for Kardestuncer. She says she is often reminded of “...the time standing with my grandmother in front of her beautiful and giant, white hand-crocheted curtain. I asked her if she remembered the time when she made it. She said ‘No, it frightens me just to look at it.’ Years have passed since then, my grandmother no longer on this earth, but I still wonder to this day what she meant. Every time I see the curtain I search for the sense of pleasure she must have felt when making it; the calm and or the pain and anxiety, in the fine endless squares. And I wonder about her reasons for making it, if it was a cultural female pastime, a need to decorate, or just a way to fill the time. Was it the vastness of the curtain that scared her, or the passing of the time?” (Kardestuncer)

This exhibition will include sculptures and works on paper, silk paper, and fabric. Thread is the most common element in all of the works. Hand-stitched thread holds shredded fabric and rice paper into balls. Brightly colored orange mud is used from a chunk of earth that Kardestuncer brought back from a village outside of Siena, Italy, as well as earth from Switzerland, Greece, Turkey, and Wyoming. Her work invites us to feel the sensitive and associative nature of materials.