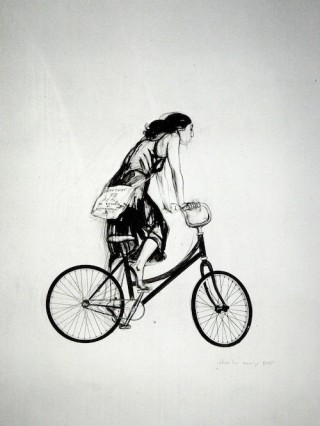 Since 2005, Charles Avery has devoted his practice to the perpetual description of a fictional world. Replete with its own population and geography, Avery’s intricately conceived territory exists today through drawings, objects, installations and texts. Exhibited episodically, these heterogeneous elements serve as terms within the unifying structure of the Island – as multiple emissions of Avery’s imaginary world, and as a meditation on the central themes of philosophy and the problems of art-making.

The centre piece of this exhibition is a sixteen foot drawing depicting the eponymous Place de la Revolution, a large circus where hundreds of cyclists converge, before spinning off on their personal trajectories. Accompanying – and relating to – the Place de la Revolution are several other drawings, sculptures and one moving image.

Avery’s vivid works articulate a space of potential discovery and intrigue, which bids the viewer to recreate the Island in their own minds.

Born in Oban, Scotland in 1973, Charles Avery lives and works in London. The first most comprehensive presentation of The Islanders project, ‘The Islanders: An Introduction’ was exhibited at Parasol Unit Foundation for Contemporary Art, London in 2008 and toured to The Scottish National Gallery of Modern Art, Edinburgh and Museum Boijamas Van Beunigan, Rotterdam in 2009. Future solo presentations include the exhibition, Onomatopoeia, Part 1, which was exhibited at EX3- Centor per l’Arte Contemporanea, Florence in 2010 and toured to Kunstverein Hanover and Frac Ile-de-France/Le Plateau, Paris in 2011. Recent group exhibitions include Life Forms, Bonniers Konsthalle, Stockholm (2009); A Walk in Your Mind, Hayward Gallery, (2009); A Duck for Mr Darwin, Baltic Centre for Contemporary Art, (2009), and Altermodern: 4th Tate Triennial, London (2009). Avery represented Scotland at the 52nd Venice Biennale in 2007 and participated in the British Art Show 7 and Folkestone Triennial in 2010.
www.pilarcorrias.com