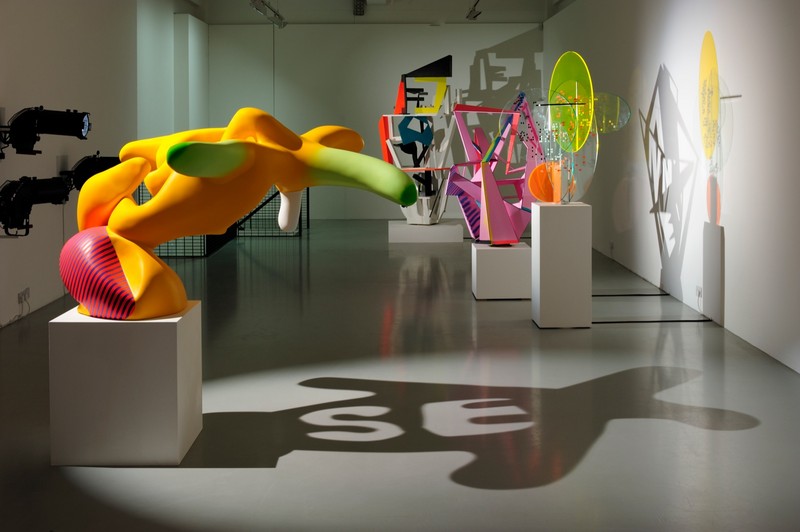 Pilar Corrias Gallery is delighted to present a new body of works by the internationally acclaimed artist Tobias Rehberger.

Widely regarded as one of the most important artists working today, Tobias Rehberger creates sculptures, environments and installations principally revolving around the concept of transformation. Working with industrial processes and technological innovations, Rehberger transforms ordinary situations and objects with which we are familiar exploring the boundaries between functionality and the aesthetic.

Following his solo show at Museum Dhondt-Dhaenens, Belgium, Rehberger is showing a series of unique shadow sculptures. At first glance, the sculptures seem abstract; they are displayed with a special lighting effect on two floors of the gallery, and seem to question the functionality of an art object. Then, at regular but very brief times of the day, the amorphous shadows on the walls suddenly come together to form a previously hidden message. While some of the art works transmit words onto the wall, others blend into the patterns of the paintings in the background, effectively disappearing.

Future projects include a commission for a 700 sq.metre project space in the Samsung Leeum Museum in Seoul, Korea opening in May 2012 and designing an ‘art-park’ for the extension of the Vijversburg estate in The Netherlands, scheduled to open to the public in 2014.

Tobias Rehberger lives and works in Frankfurt am Main.
www.pilarcorrias.com