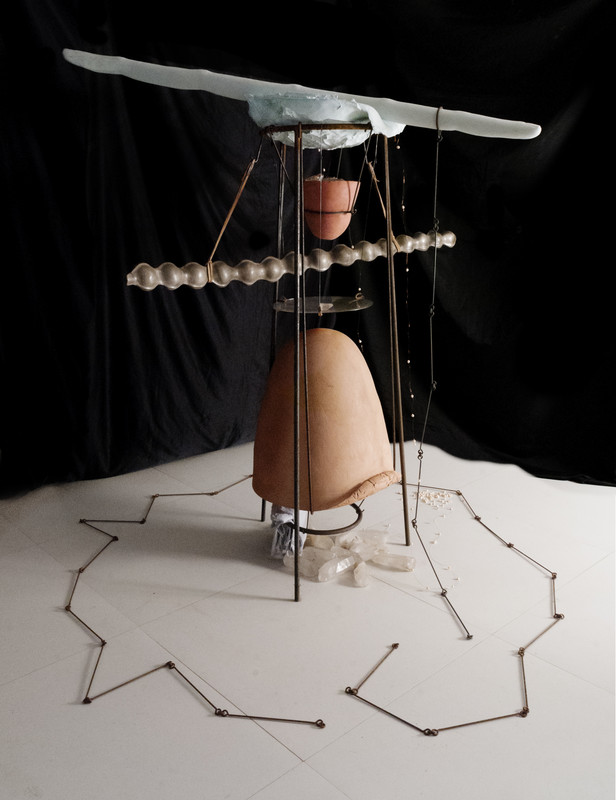 Tunga, Untitled (Horizontal Pod), 2014. Iron, bronze, ceramic, plaster, 260 x 200 x 220cm.
From “La Voie Humide” marks the second solo show by the Brazilian artist Tunga at Pilar Corrias, London. One of the most influential artists of his generation, Tunga’s practice encompasses sculpture, performance, poetry, and video. For over thirty years he has created an integrated body of work characterised by an associative interplay of mirroring and self-reference between individual pieces.

The exhibition in London presents a series of multipart sculptures and drawings, which are the culmination of a process of research undertaken by the artist over the course of the last five years. In each sculptural work, a steel tripod holds organic shapes that recall body parts such as fingers, lips, ears or genitals, which are connected to the six senses through which humans experience the sensory world and relationships.

Large unglazed terracotta and plaster vessels are filled with rock crystals, tree resin, pearls, or sponges; while sinuous bronze elements stretch out like multidigit fingers suspended by leather straps. These organic materials hold a subconscious sexual symbolism: pearls, for example, can be associated with sperm. The sculptures occupy space like bodies, without being immediately recognisable as such. Each figure is a morphological exploration, moving fluidly between abstraction and figuration. The works reflect the artist’s psychoanalytic research and in particular his interpretation of Lacan’s theory of the mirror stage, the moment in which a child recognises his or her own body reflected in a mirror. In these works, Tunga explores the moment just before, when the child’s own identity is not fully formed, and the human figure can be perceived and interpreted simultaneously in different ways through desire rather than visual recognition.

The title From “La Voie Humide” (The Humid Way) references the esoteric science of alchemy and its different methodologies of transforming matter and spirit. The ‘wet way’ indicates a process of gradual and natural inspiration for personal transformation as opposed to the ‘dry way’, which references the direct intellectual route of philosophy and science. Tunga’s sculptures reflect an interest in the energetic exchange and the spiritual changes that material transformation initiates.

All sculptures in the exhibition are intimately interlinked and seem to evolve from one another. These sculptural forms are closely connected to visual narratives expressed in Tunga’s drawings, which also suggest abstract and alchemic symbols. Drawn in a single continuous line on delicate Himalayan paper, the nearly symmetrical compositions of organic imagery evoke parts of the body, faces and sexual organs. Tunga regards the drawings as originators for the three-dimensional sculptures, carefully constructed as a musical score. Three of the source drawings become an integral part of the sculptures, executed on linen and loosely suspended from a metal tripod. A mirrored disk placed behind the linen reflects the light in the space, representing the force of the moon or the sun.

The forms and processes in Tunga’s work are directly or suggestively connected to performance as his sculptures are often activated by the interaction with human bodies exchanging and channelling energies. During the Private View on Thursday 20 November, two female performers will activate the large sculptural composition installed in the lower ground space of the gallery. First presented at Hospital Matarazzo in São Paulo earlier this year, the performance references ancient symbols of fertility through the transformative energies of natural materials such corn and pearls, and the persistence of mystical thought as a latent, powerful force within modernity.