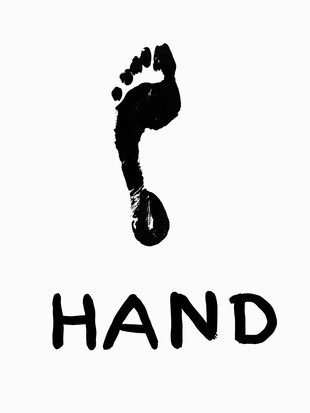 The British artist David Shrigley (*1968 in Macclesfield, GB) gained international acclaim for his cartoon-like drawings. The motifs, with their succinct combination of images and words and their display of a generally dry to black humour, have been published in newspapers, magazines and on postcards and achieved recognition since the 1990s.
What is less known is the wide variety of media to be found in Shrigley’s work that embraces sculpture, wall painting, photography, animated film and consumer design in addition to works on paper. In summer 2013, in Munich, the artist created a memorial to ‘Bubbles’, the chimpanzee owned by the ‘King of Pop’ next to a guerilla memorial to Michael Jackson created by his fans. Jackson gave Bubbles to a state-run home for animals after the chimp’s behaviour became too unpredictable for the stage. In an incidental way Shrigley launched a public discussion on the purpose of a monument and the relation between the collective memory and personal responsibility.
The exhibition at the Pinakothek der Moderne – David Shrigley’s first solo exhibition in a museum in Germany – provides an insight into an artistic view of the world that exposes mankind’s supposed certainties as one huge illusion with subtle irony and subversive humour.
www.pinakothek.de/pinakothek-der-moderne