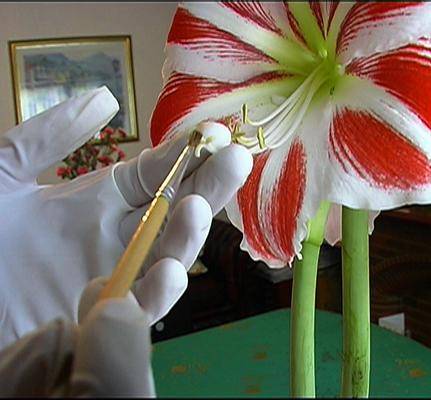 The video installation »The 4 Seasons of Veronica Read« from Kutlug Ataman (*1961) wends a path directly to the botanical workings of an unusual woman in a London suburb. In her tiny apartment, Veronica Read cultivates with heart and soul a very special species: Hippeastrum - an amaryllis plant with funnel-like, hanging flowers.

Four one-hour films reveal the various stages of the plant, from the bulb to the grown plant. The artist depicts even the most miniscule of details, which the artist governs herself, and, on the other hand, which also dominates her entire thinking and actions. Ataman¿s sensitive portrait consists of four screens that are combined in such a way, that they make up a small, square space, which can be entered. Projected on the screens, all the films are shown in sync, so that it is practically impossible once inside the space to separate out the simultaneous cycles of the plant breeding and to perceive them individually. The work was first shown at the documenta XI in Kassel.