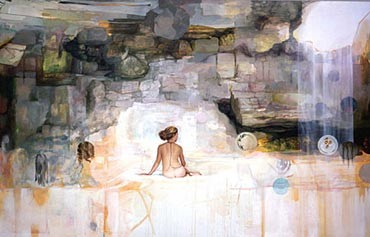 Since graduating from the Kunstakademie Düsseldorf the painter Monika Baer, who was born 1964 in Freiburg/Breisgau but now lives in Berlin, has been working on a surreally and fantasy-like oeuvre that finds expression in the form of a mysteriously placeless world. This is her first museum exhibition and it focuses on displaying some 50 or so paintings and drawings from the last decade.

Baer¿s first large-size pictures, which go back to the early 1990's, portray landscapes devoid of people. The artist gained international acclaim in 1998 with a series of paintings for which she chose highly artificial settings. The »Mozart Series«, for instance, is set on the stage of a string puppet theatre featuring garishly coloured effects and where Rococo figures appear like automated beings lost to the world. At the end of the 1990's this illusionist-structured scenario is replaced by a dreamier, drifting atmosphere. Now elements are reduced to fragments that occupy nebulously remote spaces with a magical quality. What is striking about Baer's artistic statements is her interest in bodies and shapes without a clear identity. Organic parts, strands of hair, inter-twining arterial structures and isolated objects - a hat or a skull - they each of them become central motifs in a dream world. Pictorial vocabulary that is otherwise regarded as rejected out-of-date gains a new and particular significance here - for instance, »kitsch« or »psychedelic«.The artist injects them with fresh energy through changing their context. Monika Baer is a protagonist of contemporary painting which - beginning with the generation of Luc Tuymans, Peter Doig and Neo Rauch - is redefining itself in terms of colorism, story telling and figurative reference systems. For more than ten years now, Monika Baer has provided significant impulses to this revision of art.

In collaboration with the Bonnefantenmuseum Maastricht and the Halle Zeitgenössische Kunst (Hall of Contemporary Art), Münster.
www.pinakothek.de/pinakothek-der-moderne