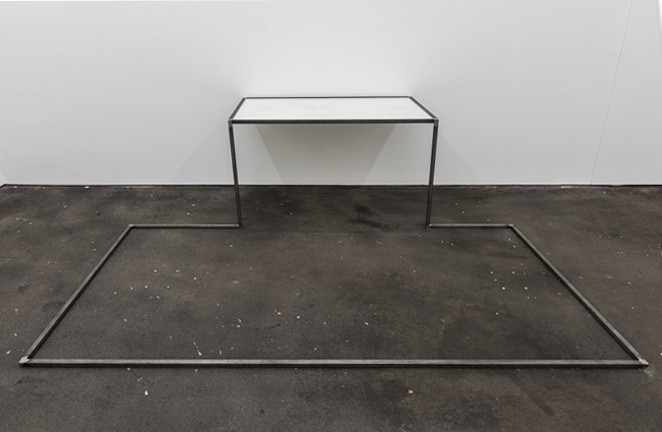 Galeria Plan B is happy to announce the opening of the first personal exhibition of artist Achraf Touloub during the Berlin Gallery Weekend, May 2 - 4.

Achraf Touloub develops a work based on the complicity between the technological society and the symbolic power of tradition, both invested with equal systemic capacities to shape the global. His drawing, sculpture and video works are built around the intuition that the conventional binary opposition between tradition and the modern mind is, in fact, a movement of convergence.

The increasing de-materialization of the technology leads towards 'the symbolic' as the real territory of confrontation, creating new protocols of representation. To survive in this new context, information has to evolve as symbol. This paradox articulates itself on the use of the archaic dimension of image as an expression of the global mind. Touloub’s work attempts to record and reconfigure the perspectives emerging from this approach.

His compositions show specific patterns created by linking figures as representations of a new standard individual condition. This condition implies an imposed state of contemplation within the time frame of a merged past and future: an eternal present. The new individual is neither dissolved in a mass – as envisioned by modernist utopia –, nor alienated, but interdependent and linked to others. We are confronted with a layer of reality made of interconnected subjective manifestations. The interlacing of time and space alters as a consequence of this new state, in which the wires connecting the individuals count as much as the subjects themselves.

Born 1986 in Casablanca, Achraf Touloub graduated at École des Beaux-Arts, Paris in 2013 and lives and works in Paris and Berlin.
www.plan-b.ro