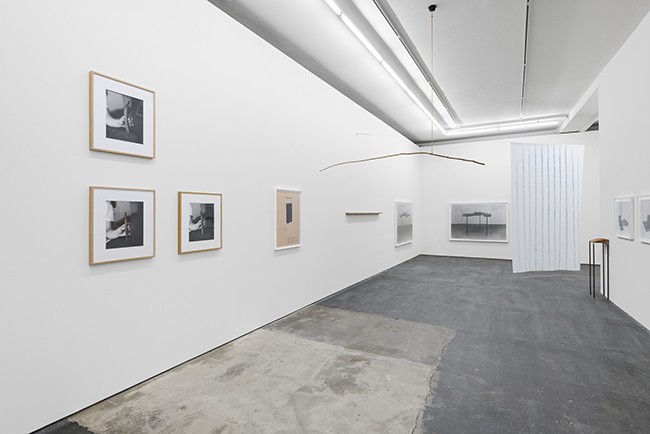 Galeria Plan B is pleased to announce the solo exhibition of Becky Beasley, curated by Mihnea Mircan, to open on Friday, the 27th of April 2018, on the occasion of Gallery Weekend Berlin.

Depressive Alcoholic Mother is permeated by questions of position and reciprocity. The exhibition focuses closely on Beasley’s long-standing fascination with the protocol of the double and with panoramic cycles, articulating mechanisms of interior and exterior spaces that are central to her practice. From the ripples of these movements, a larger concentric circle structuring the show emerges as a choreography of doppelgangers. The exhibition weaves new proximities and distances between different parts of single works, or iterations of works in editions of two. Works are unpaired and interspersed: neither one added to another, nor one divided into two, but additions of what they do not have in common and subtractions of familiarity, veerings together and apart. Autonomous, involved with and divided by another, these singular elements negotiate a shared groundlessness, or the possibility of a figure profiled against the ground of its double.

Such swirls, gyrations and inflections are the material of Depressive Alcoholic Mother. The title’s words orbit around one other in a hazy biographical permutability. They posit an inscrutable relation where there should have been denotation, indicating what the show might ‘with’ and ‘through’, rather than what it is about. The exhibition composes a polyphony of parts, of repairs played backwards as fractures and wanderings as returns.

Beasley has developed an unorthodox editioning system within her practice, whereby certain works which contain multiple parts are produced in an edition of two. The first of these must remain complete, while the second edition is to be divided into single entities, or into smaller groupings than the first. Thus the work simultaneously exists both as a whole work and a set of autonomous works.

At two points in the exhibition, visitors encounter a hinged black American walnut plank mounted on the wall. These, Brocken (I) and Brocken (II), reproduce the arm span of Beasley’s father, a recurring and variously abstracted protagonist of her work. Brass hinges are fitted where his joints would be. This outstretched gesture – known colloquially as ‘measuring one’s own grave’ – invokes both sheltering and entombment, exactitude and embrace. Brocken is German for ‘scraps’, ‘fragments’ or ‘mottoes’, and this work is a diagram for a body simultaneously extended and collapsed, transcribed as a sinuous line in space or folded upon itself for safekeeping.

‘I wanted to propose something more distancing which is nevertheless very close, too close almost’, the artist wrote, and the present installation of Brocken radicalizes this spatial and phenomenological interest. An abyss of distance closes up on the viewer of the twice-fragmented figure, removed from anatomical referent and from the reciprocal consolidation of its parts. Its membra disjecta are separated across the space of the gallery, or reassembled, at the scale of the room, as its fragile backbone

Such looping of distances, the inability to determine the positions of objects in space or in relation to their assumed correlates, prompt a consideration of Beasley’s poetics as the re-encoding of vertigo, in forms and their placement. The subject of vertigo inhabits a spinning place, between distances that appear immediate and hard, obstructive, and futures that have become imminent: the perception of ground becoming figure, right up to the retina. Beasley employs vertigo as a continuum between a quasi-body made vertiginous, stretched into its own anamorphosis, and its reconstitution in the corner of the viewer’s eye. Vertigo tangles together pulsating vacancy and manifest incompletion on one hand, and the ‘too close’ and ‘too much’ into which vulnerability can be bent or compressed on the other.

The work, Bearings (2014), was made after the St Jude storm hit Southern England. Nine slender windfall twigs were collected by Beasley’s father, which the artist then cast in brass and screwedfitted together. Hanging from the ceiling, the work spins at one rotation per minute, conserving and domesticating some of the meteorological impetus that can rip branches from trees. The panoramic arc of the mobile points at a co-constitution of form and movement, incomprehensible one without the other, not making their dependency explicit. Bearings deals in ‘more of less’, pirouetting between doubt and certainty, producing surplus through the re-iteration of a lack. It does not pivot melancholically around the loss of a larger arborescence, but around an etymological root. ‘Environment’ stems from the French virer, ‘to turn’, as a circular organization of perspectives onto and out of a specific milieu, as a stirring of diaphanous outlines. The slanted elongation of the conjoined twigs might trace something akin to a curved twist, a deviation from the regularity that natural or symbolic environments are assumed to possess and to offer to the intellect. Rather than conjure the neatness of the circle, its elliptical whirl is closer to the order and disorder of the spiral, where nothing is first and everything is new.

Michel Serres writes that in nature there are no perfect circles. ‘No exact rounding off, no pure circumference, spirals that shift, that erode. The circle winds down in a conical helix.’ And he continues: ‘Who am I? A vortex. A dispersal that has come undone’, that has depleted its vortical energy and has stabilized in a form onto which a self can be projected and modeled, a form both fortified against and constituted in the currents that would sweep it asunder. Between the center-tothe-sides extension of the body that is recomposed in Brocken and the mechanical ‘crank’ that converts, and rectifies, such movements into a rotation in the mobile, there is the sense of a nameless identity finding its bearings, navigating an environment via side routes and lagging behind in perilous interstices, tracing a fragment from a meshwork woven by myriad lines, as living beings thread their ways through the world.

As a corrective to a recent flurry of projects, artistic and curatorial, that traffic in the ‘vibrancy’ or vitality of matter by dragging inanimate things across the organic divide, giving them a kind of life, placing them in a semantic sphere whose exponents and privileged beneficiaries we are, Beasley is interested in what things can do, to and as subjectivities, without being smuggled over the border of the living. In the common measure between Brocken and Bearings – common to them but persistently alien to us – there is a solidarity in alterity, a making visible of reciprocities between objects, selves and positions that are not premised on what they divulge about one another or on being ultimately interchangeable, but on complicating the trajectory of a thought that resists both the stamp of an auctorial I or the fallacies of second-degree animation. As such, Beasley’s project sits outside the purview of Steven Connor’s perceptive diagnosis of such delusions, which breathe in all things the quasi-life of a makeshift self, to make them docile and fungible:

‘Whenever human beings attempt to drain themselves out of the pictures they form of things, in the service of a direct and non-distorted apprehension of the things themselves, they usually turn out to have secretly left a cherished part of themselves in the object. The thing is acknowledged or embraced as entirely, enigmatically other – in other words, just like me in my otherness. This is a cryptic or paradoxical kind of animism, in which the object resembles the subject not in sharing its particular powers or capacities, but in exhibiting the power of resistance or reserve, the power to withdraw or withhold itself from being known, that the subject secretly, stubbornly, assumes as its own alone.’

Depressive Alcoholic Mother entwines revolving apprehensions and the skewed grids that arise when thinking is met with wayward objects in the world, with reciprocal insufficiency engendering a process of reciprocal amplification. Through Beasley’s insistent use of doublings, placing similes and similitudes in relations that do not hinge on direct recognition but on its slippages and antonyms, on interlocution rather than identity, the system of operations, apertures and resistances that is the infrastructure of the show acquires a pregnant stereoscopic quality, and comes to resemble a gaze: the spatial transcription of an ocularity in a group of works.

The contrapuntal drive of Depressive Alcoholic Mother ramifies to integrate an appropriated John Player ashtray, ‘kissing’ benches that promise intimate contact as much as threaten exposure, cyanotypes on vintage bed-linen, exposed in late winter light on Beasley’s studio floorboards, that chart how luminosity traverses the space of the gallery, elements from Beasley’s long-term project on Victorian photographic pioneer, Eadweard Muybridge, author of the ground-breaking 1878 panorama of San Francisco and said to be engaged, at the time of his death in Kingston, with planning a scale model of the Great American Lakes in his back garden, a revolving postcard rack stocked with pictures of plants whose location and date compose a vegetal autobiography at a time of breakdown, figures whose capacity to interlock, whose corresponding protrusions and concavities, are precisely the pivots around which they turn away and aside from one another. They create a space of coexistence without shared boundaries: whirls slowing down into knots, postscripts advancing to the position of preambles.

Mihnea Mircan is a curator, writer and a PhD candidate in Curatorial Practice at MADA, Monash University, Melbourne. Mircan has curated exhibitions at institutions including the Extra City Kunsthal, Antwerp, as artistic director between 2011-15, and the Venice Biennial, as curator of the Romanian Pavilion in 2007. He has contributed essays to numerous exhibition catalogues, monographs of artists such as Pavel Büchler, Laure Prouvost, Jean-Luc Moulène and Tom Nicholson.
www.plan-b.ro