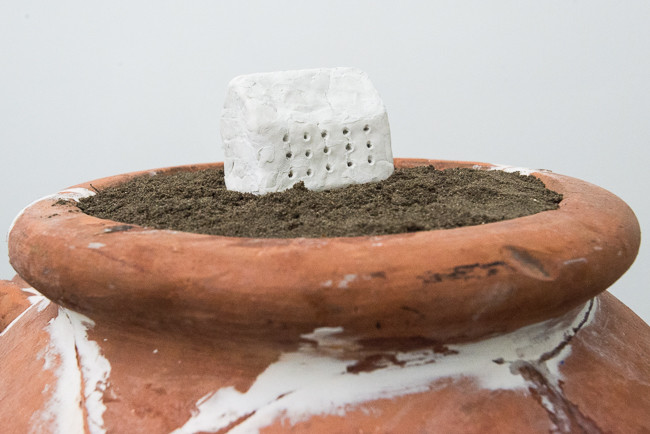 Galeria Plan B is happy to announce the first solo exhibition of Belu-Simion Făinaru (born 1959 in Romania, lives and works in Haifa, Israel and Antwerp, Belgium) in the gallery’s space in Berlin, presenting object and installation works fueled by the concept of The Fullness of the Void.

Făinaru’s work uses a wide range of media, such as sculpture, installation, drawing and video. The works contain several layers of meaning that touch upon Jewish-Romanian history, text, and issues of identity and territory. Although his predilection for these subjects is indisputable, Făinaru’s oeuvre also unmistakably addresses several universal human themes. For instance comprehensive notions such as religion, sanity, memory and language are often employed in direct relation to their opposites: secularity, madness, forgetting and visual art. The ‘result’ of Făinaru’s artistic, historical and philosophic interests can be seen as a complex tapestry of contrasts and contradictions that define life.

Dr. Daniel Wayman of Tel Aviv University writes on the practice of Belu-Simion Făinaru and the works in the exhibition: ‚Over the years the artist Belu-Simion Făinaru has coped with issues connected to the concept of the nothingness that drives his creativity. The monastically compressed characteristics of the works, the sparing choice of materials, the limited forms and colors (chiefly black and white), as well as the use of Hebrew lettering, direct the viewer to symbolical spiritual meanings and to philosophical issues beyond the identification of the present physical object. In some of the objects derived from the ready made concept in art, the tension is created by disruption of the functionality and by the disconnection from useful purposefulness. These duality systems prompt us to engage in queries regarding the existing present, the identity or actual reality that we apprehensively embrace when facing the threat of the void and the nothingness. The central work in the exhibition The Fullness of the Void is titled Rose of Nothingness (2015) and refers to the collection of poems by Paul Celan that deal with Kabbalah issues. Făinaru has created an installation comprising a drip sprinkler system hanging from the ceiling. The sprinklers drip a black liquid that is collected on the floor. The black liquid refers to the image of the black milk, that appears in Paul Celan's poem Fugue of Death as a recurring theme:

Like Celan, Făinaru combines contrasts creating a rich symbolic reality derived from the past and the present, from the sacred and the profane, from the soul and the body. Like Celan’s meridian address that describes a symbolic search for a map of his childhood and an aspiration to find a place that is no place, as in the poem where he finds himself anew, thus does Făinaru combine objects and images, sights and memories that create an internal and external journey in search of identity and place.’

The exhibition’s title - The Fullness of the Void - takes on the title of a book by Dov Elbaum, researcher of Israeli Kabbalah who was invited to contribute a text to the exhibition. Dov Elbaum describes the connection between Kabbalah and the practice of Belu-Simion Făinaru. The Fullness of the Void refers to an influential concept in Judaism that describes how in the process of Creation, God had to withdraw from his infinity, creating a void (‚an expanse that had been voided of the infinite essence of God‘) in order to make place for the creation of the world. ‚The initial beginning of the Creation is the removal of God from himself. Only after the fullness of the void has been achieved does the project of creation begins... This spiritual concept comprises a new mythical image: the Creation began from a state of exile. In order to enable the infinite God to create something external to himself he had to exile himself. As one might imagine, the significance given to the notion of expulsion in this religious theory was extremely important for the Jews of Europe during the last hundreds of years.’

The contributing text of Prof. Dr. Dov Elbaum introduces several approaches towards this concept through the history and describes "The fullness of the void" as ‚the source of renewal. It is not only a frightening or dangerous or dismantling or borderline place – it is the spring of everything, it is the raw material from which works are created later. It is the chaotic state from which we draw a line or a thought and bring it to a kind of word and deed. In the work of Belu-Simion Făinaru we can see the brilliant visual formation of this unsayable the fullness of the void. In a clean language of expanses, materials and words Fainaru succeeds in imparting expression to the large spring of the fullness of the void, a spring from which every new creation comes into the world. Fainaru has actually succeeded in giving the deep idea of the fullness of the void material reality and bodily reality.‘

Born 1959 in Romania, Belu-Simion Făinaru lives and works in Haifa, Israel and Antwerp, Belgium. Fainaru’s work has been presented frequently in collective exhibitions all around the world, most noteworthy are the 1992 Documenta (DE), the 1993 Venice Biennale (IT), the Sonsbeek Biennale (NL) and the 2006 Biennale in Havana, Cuba. Fainaru also had several solo exhibitions in acclaimed institutions such as: Israel Museum in Jerusalem, S.M.A.K. Museum in Ghent, M HKA in Antwerpen, Lehmbruck Museum in Germany and Saitama Museum in Japan. Next to his activities as a visual artist Făinaru is also a guest lecturer at universities in Belgium and Japan, and he has been professor at the Department of Architecture at the Wizo Academy in Haifa (IL) since 1984. In 2010 Belu-Simion Făinaru founded the Mediterranean Biennale of Contemporary Art in Israel, where he is also the director and curator. In 2015 he founded AMOCA the Arab Museum Of Contemporary Art in Sakhnin. The museum is the first of its kind in Israel in the sense that it aims to promote co-existence between Arab and Jewish communities by means of cultural collaborations.
www.plan-b.ro