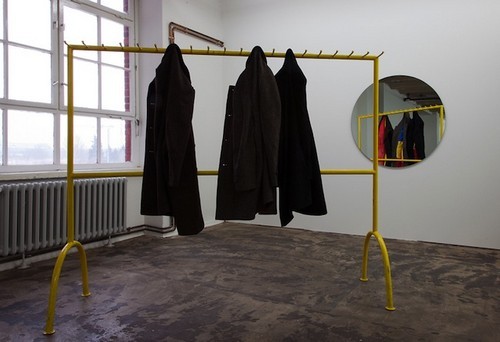 BERLIN SHOW #2 reports on the work of Plan B artists, pursuing a series of exhibitions the gallery begun in September 2008, for the inauguration of its Heidestrasse space.
The exhibition brings together pieces which share an atmosphere of interrogation, of questions halfanswered and leading to other questions. The works also make visible a modus operandi, an openness to interpretation and negotiation. Never shown at Plan B, these pieces have either been produced for other spaces (art fairs, etc) or laid aside for future use by the artists themselves.
In a separate category, there are works that to various extents rely on the involvement of gallerist Mihai Pop, who functioned as trigger, element of cohesion or even ‘prime matter’ in the production of these pieces: an affective connection to the rest of the programming and the gallery’s approach justifies their inclusion in this exhibition.
Rather than ‘brought home’ in conclusive terms or possessively repatriated, the works are deployed in the physical space of the gallery, and look for its core. We think of it as an affective recuperation, and as a way to remember or clarify our directions in the past two years.
www.plan-b.ro