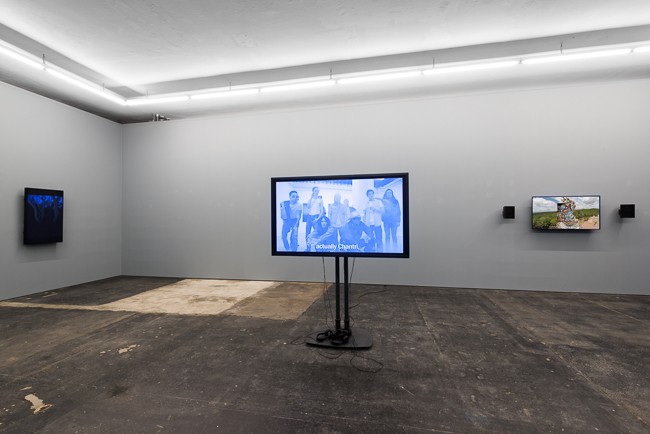 Galeria Plan B is pleased to announce the second part of BERLIN SHOW #5: Collectors’ Loop – a group exhibition with selected video works from private collections. The BERLIN SHOW programme sporadically examines the mechanisms of art production and display, shifting the focus from the outcome – the artwork or exhibition – to the methods, procedures, and “professional kits” involved, questioning their nature and dynamics in a reality check exercise.

BERLIN SHOW #5: Collectors’ Loop explores the relationship between gallery and collector beyond the logic of acquisition that traditionally connects them. The gallerycollector relationship implies mutual understanding and trust, as well as sharing distinctive, defining values developed over the years during the process of getting to know each other better. As video art is often able to elude art market speculation, it offers a context for the intellectual exchange to become central to this relationship.

The selection of works in the exhibition is the result of a personal, subjective parcours curated by the gallerists starting from the material provided by the collector and a mutually inspiring conversation. The exhibition also tackles impossible juxtapositions, declined proximities, the risk of dissonance and the invisible limits of displaying the collection in a gallery, rather than in the collector's private viewing space.

The second part of the exhibition focuses on a selection of works from the collection of Camilla and Eduardo Barella, based in Sao Paulo, Brazil, featuring video works by: Jonathas de Andrade, Ciprian Muresan, Paulo Nazareth, Dalton Paula, Dan Perjovschi, Wilfredo Prieto and Yoshua Okon.

The first part of the exhibition focused on a selection of works from the collection of Luc and Carine Haenen. Based in Antwerp, Belgium, Luc and Carine Haenen started to collect in 2002 and are expanding the collection around core artworks that challenge the duality of life and death as seen through the lens of history, religion or speech. The first video collected was Where She is At (2001) by Johanna Billing, included in the selection presented. The collection comprises works by Uri Aran, Korakrit Arunanondchai, Johanna Billing, Adrian Ghenie, Jos de Gruyter and Harald Thys, Victor Man, Iulia Nistor, Navid Nuur, Rachel Rose, Stewart Uoo, amongst others. The exhibition featured video works by: Uri Aran, Korakrit Arunanondchai, Johanna Billing, Navid Nuur and Enric Fort Ballester.

A constant presence for the entire duration of the exhibition, irrespective of the collection on view, is the video work and so on (2014) by Enric Fort Ballester. A proposal that occurred during the process of research for the project, this work acts as a prologue. A metaphor for the medium itself, Fort Ballester's work highlights the repetitive nature of the video and the resulting state of hypnosis generated by the loop.
www.plan-b.ro