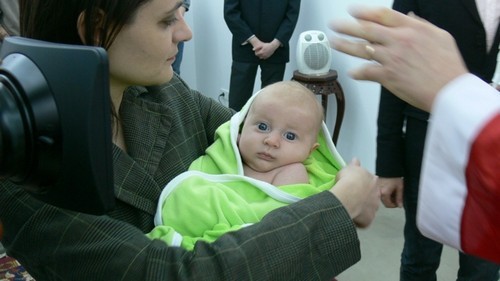 Galeria Plan B is happy to present the first solo exhibition in Germany of the Romanian artist Ciprian Muresan. The exhibition in our gallery takes place parallel to his solo show at n.b.k. - Neuer Berliner Kunstverein, to be opened on July 2.
Two books by Franz Kafka inexplicably fuse, without a motivation that would serve to frame this as either an act of methodical, ecstatic vandalism, or a desire to reconnect a kind of totality within the author’s oeuvre; the full text of the ‘Gospel of St. John’ is transcribed by hand on rubber-bound copy-sheets, seemingly in preparation for a most difficult exam; the anamorphic skull in Hans Holbein’s “Ambassadors” is presented frontally, in a drawing which suggests that anamorphosis, or indistinction, might be relocated as a smudge of color on the bodies of the Ambassadors themselves. Ciprian Muresan’s exhibition at Plan B Berlin speculates on the passage of time in cultural history, the ownership and classification of symbols, and the erosion of rituals.
A video shown here is a dislocated, and hypnotically effective, version of the Baptism ceremony performed in Orthodox churches. The ritual happens in a non-descript white space, where certain props recall a religious setting while others disorient the sense of location. Family and friends witness the passage of the child from a state of being right outside the religious norm, to one of obedience and promised redemption, of spiritual give and take. The script of the performance is the canonical text of the Orthodox Baptism, a meticulous teasing out of sin, violence, threat and salvation, yet the sacrament itself is undertaken by a character thoroughly, intolerably out-of-place: Santa Claus. The striking heterodox nature of the protagonist is permanently negotiated between the dutiful performance of both text and ritual gestures, and the possible, parallel interpretations the work breaches. The video speaks of a confusion that Christianity itself staged and took advantage of, in its use of symbols of rejuvenation and promises of deliverance, and of the current, converse confusion where spiritual life is engulfed in a world of commerce that narrates, uses and performs religion, that constitutes the present via the future of financial credit and brings presents to good citizens.
‘Santa Claus’ articulates an economy of the soul, self and social body: one which we enact throughout the year, and in which Christmas is only the anticlimax.
Un-archiving Kafka and “clarifying” Holbein’s memento mori apply a similar set of critical questions to cultural consumption and commodification. Kafka is a recurring landmark in Muresan’s practice: a recent work staged an absent character – one who has vanished after having filled a supermarket cart, to the brim, with copies of ‘The Castle’, after what must have been a spree through either a complete, impossible archive of culture or in a supermarket of knowledge and classification. The work at Plan B confuses destruction, preservation, translation and artistic added value, by literally conflating “The Trial” and “America”. In Holbein’s “Ambassadors”, the skull becomes legible as such only if looked at from a raking angle, therefore from a position that is first epistemological, then mystical, as it situates the viewer directly under the crucifix.
From this oblique perspective, the choice to present the skull frontally is over-determined. The un-coded access to an image translated in its own indirect perspective, therefore in inadequate terms, is an elliptic comment on the mechanisms of validation and exclusion that ensure the ‘flow’ of art history. It sets the scene for ‘Dog Luv’, a shadowy and unsettling dialogue on the definitions of the non-human, about dogs to the same extent that it is about different shades of obscurity and contradiction, about distinct points, impulses and timelines interwoven, bound with each other in in-between-ness. About the lacunae this transformation leaves on a coherent map of subjects and objects, institutions and worlds.

Ciprian Muresan, born 1977 in Cluj, Romania, lives and works in Cluj. Recent important exhibitions include the Sydney Biennial 2010 (current), the group show Promises of the Past at Centre Pompidou Paris (current), Witte de With Center for Contemporary Art, Rotterdam (2010), the Romanian Pavilion at the Venice Biennial 2009, the group show The Generational: Younger Than Jesus, New Museum, New York (2009).

Mihnea Mircan, born 1976 in Bucharest, Romania, is a curator currently based in Bucharest.
www.plan-b.ro