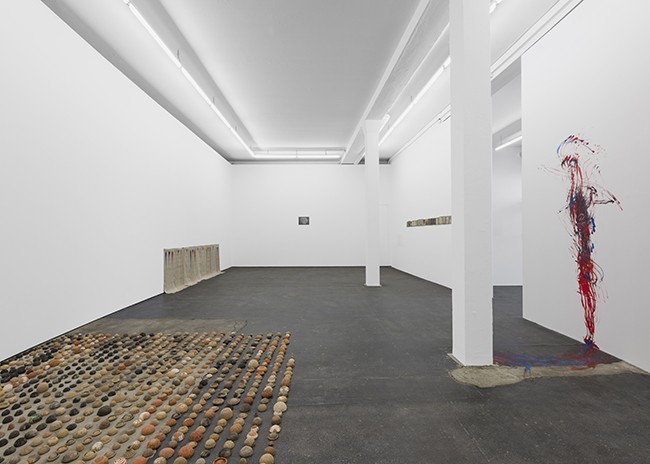 The exhibition brings together for the first time the clay and ceramic objects of Eugenia Pop (1945- 2012) with a selection of works and studies related to Navid Nuur's (b. 1976) research and practice of clay firing and glazes. By using natural materials such as soil and various minerals, both artists access a pre-cultural era, a time preceding human existence and their urge to shape ceramics from the omnipresent, basic elements of earth and water. Spanning almost twenty years, from the 1990s to 2007, the series of ceramics by Eugenia Pop equals life with the oeuvre, in that she used to make a new work each day. Eugenia Pop's infinite string of small hills are an open territory similar to the recent experiments of Navid Nuur with glaze – a meta-matter, which is the result of a double burn, both material and internal, from the side of the artist. The works also mark the attempt of Pop and Nuur to accelerate and energize the world by exploring its core material through shapes that are an ongoing process in theory, while accepting the world as it is and always has been. This reveals the leap of faith that both artists invest their works with – the trust in matter irrespective of the uncertainties posed by the process and the potentially surprising results.

Eugenia Pop was a leading figure of the alternative Romanian art scene in the 1970s and 80s. Her experiments with installation, objects and photography were the opposite of Socialist Realism – back then the official, dominant aesthetic. Pop developed her work on a conceptual basis, driven by the self-interrogation of the artistic process and a fascination for structure. The interest for process was at the forefront of her practice, whether it was creating clay figurines, burning different types of soil in unconventional ovens or using oxids and pigments derived from plants.

Encouraged by Ion Grigorescu, an important figure of the time, Pop took up experimental photography, exploring social issues, notions of gender, as well as natural structures and assemblages. She exhibited the resulting series of solarised photographs and rayograms together with fellow artists Geta Brătescu, Constantin Flondor, Wanda Mihuleac. In the 1980s Pop turned to performance under the influence of Ana Lupaș, and approached controversial issues by using simple, natural materials such as clay or thread.

Best known for ceramics, Pop translated her research of traditional artistic forms and Rudolf Steiner’s Antroposophy into numerous clay figurines with vegetal, geometric or antropomorphic shapes bearing ancestral symbols. Universal and personal mythologies became a source of inspiration for her ronde bosse compositions in porcelain or terracotta. In her own words, Pop was searching through her art for ʺthe harmony with The Essence and The Truth.ʺ Earth is the main archetypal meaning of her relation to objects and materials, seen as the repositories of forms and truths about humanity. Passionate about the basic techniques of ceramics, she approached this medium in relation with other fields, like performance. Moreover, Pop used to conceive her exhibitions according to a spiritual scenography: ʺMy objects are connected by the void between them, by the light and meanings. My aim is to symbolise the unconventional sacred.ʺ The small objects she realized may also be seen as collectivities of characters, aggregated in communities in situ.

Navid Nuur researches the way in which specific spaces and materials can engender new experiences, shifts in attention and perceptual thresholds. Having thoroughly digested the advancements of conceptual and post-conceptual art, Nuur’s return to materials, crafts, to the innovations and affects they can occasion, is a critical and much as sensuous investigation of their role in a new kind of aesthetic experience. His work is an expansive sensorium, where the distances between magic and science, between speaking through objects or materials and speaking in critical jargon, between tactility and touch screens, the sleight of hand and the movement of electricity are enlighteningly compressed.

For the past few years Navid Nuur has been developing his practice with ceramics based on the fact that matter can be altered into what could be described as a conceptual alchemy. The selection of handmade tiles developed by melting materials as varied as palm tree ash, lava, microchips, and pre-historic remnants draw on the common practice among potters of testing tiles in order to find the perfect glaze. Similarly, Nuur pushes the boundaries of materials by heating minerals at temperatures of up to 1270 degrees Celsius until they transcend their initial state, thus shifting their dimension. As the small clay hills of Eugenia Pop, Navid Nuur's tiles share the potential of an infinite repetition and act as an alphabet, while the criptic notes on their margins resemble notations on paintings, although they are conceptually closer to sculpture.

Informed by Nuur's experiments with home brewed ink that started in 2007, a new set of inks were used to paint dots on linen in a collective study on the movement and volume of colour. In a similar attempt to that of Eugenia Pop to release the potential of clay in a direct relation with the body, Nuur tries to release the energy of colours in the site-specific painting and sound installation Redblueredblue, 2017, whereas in the work Untitled, 2011 made of bronze, wood, marble, and wax, Nuur reflects on the process of sculpture. Having used materials traditionally associated with sculpture in an unexpected way, Nuur opens us multiple potentials for a dialogue around ideas of being, making, and turning.