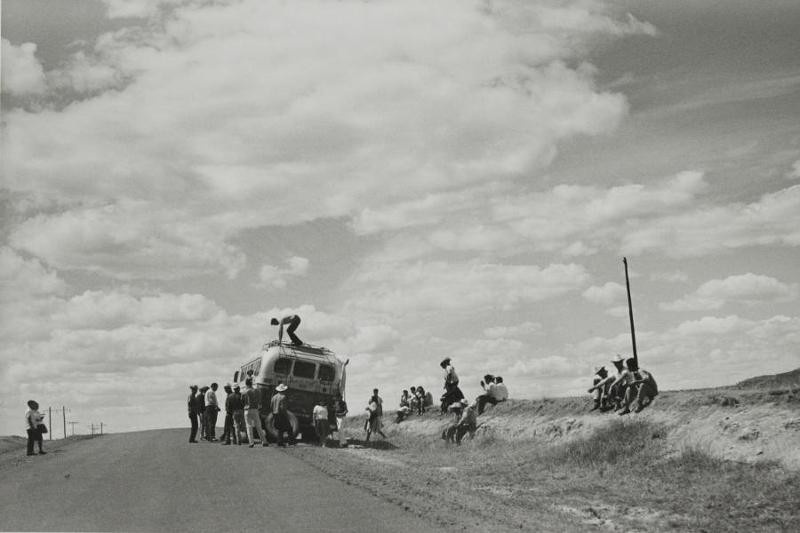 The Centre Pompidou is to present Beat generation, a novel retrospective dedicated to the literary and artistic movement born in the late 1940s that would exert an ever-growing influence for the next two decades. The theme will be reflected in all the Centre’s activities, with a rich programme of events devised in collaboration with the Bibliothèque Public d’Information and Ircam: readings, concerts, discussions, film screenings, a colloquium, a young people’s programme at Studio 13/16, etc.

The Beat Generation was born with William Burroughs, Allen Ginsberg and Jack Kerouac, who met at New York’s Columbia University in 1944. The movement later shifted to the West Coast, where it gravitated around Lawrence Ferlinghetti’s City Lights bookstore and publishing house in San Francisco, and for a short time also the Six Gallery, which on 7 October 1955 staged Ginsberg’s celebrated reading of his poem Howl, prompting a highly-publicised obscenity trial and bringing the Beat poets a paradoxical fame. Between 1957 and 1963, Paris would be an important centre of activity for the Beat Generation: William Burroughs, Gregory Corso, Allen Ginsberg, Peter Orlovsky, Brion Gysin, and others regularly stayed at the “Beat Hotel” at 9 rue Gît-Le-Cœur, a great rendezvous of the Bohemian Paris of the post-War years, which became for them a laboratory of visual and sonic experiment. It was there in particular that Brion Gysin, William Burroughs and Antony Balch developed the cut-up technique, that Burroughs wrote his Naked Lunch and Brion Gysin invented his Dreamachine.

Foreshadowing the youth culture and the cultural and sexual liberation of the 1960s, the emergence of the Beat generation in the years following the Second World War, just as the Cold War was setting in, scandalised a puritan and Mc Carthyite America. Then seen as subversive rebels, the Beats appear today as the representatives of one of the most important cultural movements of the 20th century – a movement the Centre Pompidou’s survey will examine in all its breadth and geographical amplitude, from New York to Los Angeles, from Paris to Tangier.

The Centre Pompidou’s exhibition maps both the shifting geographical focus of the movement and its ever-shifting contours. For the artistic practices of the Beat Generation – readings, performances, concerts and films – testify to a breaking down of artistic boundaries and a desire for interdisciplinary collaboration that puts the singularity of the artist into question. Alongside notable visual artists, mostly representative of the California scene (Wallace Berman, Bruce Conner, George Herms, Jay DeFeo, Jess...), an important place is given to the literary dimension of the movement, to spoken poetry in its relationship to jazz, and more particularly to the Black American poetry (LeRoi Jones, Bob Kaufman...) that remains largely unknown in Europe, like the magazines in which it circulated (Beatitude, Umbra...). Photography was also an important medium, represented here by the productions of Allen Ginsberg and William Burroughs – mostly portraits – and a substantial body of photographs by Robert Frank (Les Américains, From the Bus...), Fred McDarrah, and John Cohen, all taken during the shooting of Pull my Daisy, as well as work by Harold Chapman, who chronicled the life of the Beat Hotel in Paris between 1958 and 1963. The same was true of the films (Christopher MacLaine, Bruce Baillie, Stan Brakhage, Ron Rice...) that would both reflect and document the history and development of the movement.

Focused on a precise historical period and deliberately making use of “low tech” media and means of reproduction (vinyl discs on turntables, carousel slide projectors, 16mm film projectors) this exhibition illustrates how profoundly the Beat Generation – in its expressive freedom, its breaking down of boundaries between disciplines and cultures, its “poor”, ecstatic and contemplative aesthetic, and also its violence – influenced the development of today’s countercultures, revealing it as their origin and casting light on ongoing problematics.
www.centrepompidou.fr