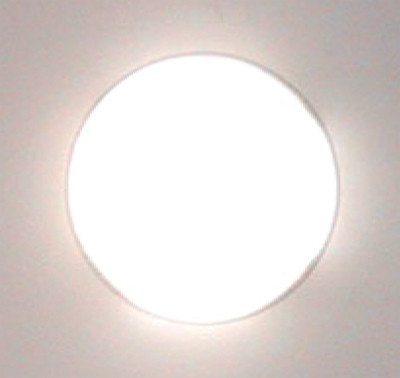 Since the mid-nineties, Christophe Berdaguer and Marie Péjus have been exploring a dimension of the visual arts strongly associated with architecture and focused on an analysis of the environment and the production of projects in relation to housing or land use planning.
From 21 October 2008, they will be presenting 7ème continent, a light installation made up of a Perspex hemisphere equipped with an electronic programmer and fluorescent lamps that artificially generate the daily spectrum of light. The work, like the dazzling sun, offers an invitation to meditation and reflection. In the light of this luminous sphere that captures the attention, the boundaries between imagination and reality fade away.
The work 7ème continent by Christophe Berdaguer and Marie Péjus joins the National Museum of Modern Art's collections, following in the wake of those by Didier Marcel, Natacha Lesueur, Tatiana Trouvé, Boris Achour, Matthieu Laurette, Mircea Cantor, Loris Gréaud and Vincent Lamouroux, the successive winners of this Prize since 1999.
In 2008, the 10th Prix Fondation d'entreprise Ricard will be awarded on 24 October during the Bal Jaune to one of the artists from the "La consistance du visible" exhibition, curated by Nicolas Bourriaud and presented at the Fondation d'entreprise Ricard from 10 October to 22 November.
Every year since 2000, the Centre Pompidou has welcomed the Prix Fondation d'entreprise Ricard, in recognition of an artist representative of the young French art scene. The 2007 prize was awarded by a jury of collectors to Christophe Berdaguer and Marie Péjus for their work 7ème continent.