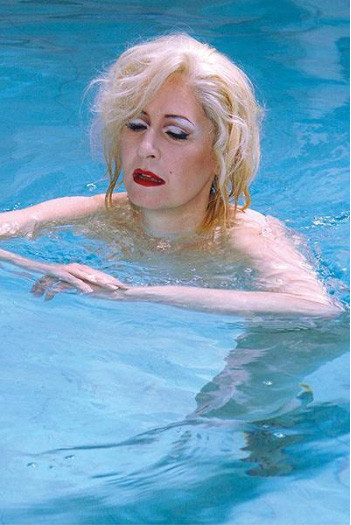 Dominique Gonzalez-Foerster is a major artist on the French and international scene. Her work draws on a living memory of film, literature and the open structures of architecture and music as ways of exploring the possibilities of the artistic realm. Through a maze of rooms, environments and passages, this completely new exhibition devoted to her by the Centre Pompidou, entitled "Dominique Gonzalez-Foerster. 1887-2058", sets around thirty works in relation with each other in the Galerie Sud, the terraces of the museum's fifth floor and the Atelier Brancusi garden (subject to certain conditions). Both retrospective and forward-looking, the exhibition lays out an open time line in the space, going from 1887 to 2058. It combines several centuries and climates, starting in the late 19th century and moving through the experiences of the 20th, immersing viewers in landscapes and interiors that are tropical, arid, biographical and dystopian in turn. This collection of parallel realities and staged areas, where the genres of landscape, portrait and period rooms coexist, becomes a fictional abode with numerous entrances. Sometimes stages, sometimes games areas, sometimes introspective narratives, Dominique Gonzalez-Foerster's rooms, films and apparitions bring all kinds of visions from film, literature and science together, like an opera or musical, turning the exhibition into a heterogeneous, multiple world teeming with sensations, narratives and quotations.

In Dominique Gonzalez-Foerster's work, there is a tension between finite and infinite, fragmentation and aspiration to a whole, appearance and disappearance: a superimposition of time and rhizomatic spaces which, through their porosity, can be analysed, as Danielle Cohen-Levinas puts it, as a "phenomenon of condensation, a small-scale version of an infinite extension of chronological events [...] which mingle with the instant, the here and now." From the "Rooms" – theatres without actors – to the "Biographical Sessions", which liberate fiction, memory and moods; from Ann Lee to her "apparitions" as Fitzcarraldo or Vera Nabokov, her entire output can be reinterpreted as a phenomenon of expanded time and space, literature, cinema and the limits of identity, all composing a huge opera. Dominique Gonzalez-Foerster leaves the work in suspense and displacement, in order to make it appear "here and now" in spaces that are all thresholds meant to be crossed by the imagination. She situates viewers in the heart of the work, just as Alain Resnais in L’Année dernière à Marienbad suggested that viewers be "in the cinema for the first time [...] the co-creator of a film [...]. It is for them to decide whether this or that image is real or imaginary, whether an image represents the past or present, and to decipher the clues, standpoints and plot using their own sensibility and memories.

Emma Lavigne - The exploration of time has been a constant theme in your work for many years now: the representation of several superimposed strata, a heterogeneous world inhabited by apparitions, narratives and quotations. How does this temporal dimension take shape in the exhibition?
Dominique Gonzalez-Foerster – The digitisation, quantification and technologisation of behaviours, movements and attractions has aroused the need for the fantastic, for presences and moments that defy standards and numbers – just as when standardisation and industrialisation were accelerating in the late 19th century. We can travel in time, make graphs linking extremely distant points, and wonder at secret questions. The Centre Pompidou proposed a retrospective, which I wanted to extend as far as possible with a timeline stretching between two dates: 1887, the year in which the Palacio de Cristal was built in Madrid, in which the Splendide Hotel was set up last year, and 2058, with the dystopian London shelter I created for the Tate Modern's Turbine Hall in 2008, which contained giant sculptures, books and films that had all taken refuge from climate change. Between these two dates, we find Space 77, which corresponds to the first exhibition staged at the Centre Pompidou when it opened (on Marcel Duchamp, born in... 1887!), and the Brasilia Hall, named after the capital created in 1960. The exhibition will be a labyrinthine palimpsest based on the sensations of art, existence and displacement.

EL - You have staged numerous exhibitions and shows. How did you approach the stage design of your own exhibition? Is it a complete work in itself?
DGF - This group of parallel realities and staged spaces is a fictional abode with several entrances. It questions the inside and outside, absence and presence, identity and fiction, the present moment and the exploration of time. In order to go right to the boundaries of the exhibition, towards the architecture, the garden in the Atelier Brancusi and two of the Centre Pompidou's terraces form part of the 1887-2058 timeline, and are the open sections of the exhibition, more like the gardens and parks presented at Kassel (2002), Münster (2007) and Inhotim (2010), exposed to wind and rain and to changes in light and climate, influenced by the architects Lina Bo Bardi, Sergio Bernardes, Luis Barragan and Roberto Burle-Marx, and the writer J. G. Ballard.

EL- The rooms, films, apparitions and environments all dialogue with the architecture, but come from literature. What is your relationship with narrative, the text and this "broadened literature" which you set up in the space?
DGF – In 2007, Enrique Vila-Matas and I began a highly productive dialogue. We met regularly in order to discuss approaches and influence each other without any manifesto or method. In the exhibition, there will be a "room" to which only Enrique holds the key and which will remain a mystery for the other viewers. In Space 77, haunted by the ghost of the Grand verre (Marcel Duchamp's manifesto work – Ed.), there will be a showcase, for which Philippe Parreno is creating a composition in sound and music, similar to the voice you hear in your head when you are thinking. Colours and landscapes will mingle texts and characters, as though in a new form of opera, with no interval or orchestra pit.

EL - You have often been asked how the viewer can be maintained in an artistic instant for longer. What role do the viewers play in this opera you are inviting them to?
DGF - When they are constrained by the spatial and temporal framework – that of the show and the armchair –, film, opera and theatre audiences focus acutely on the work being performed, and this produces intensity and pleasure. Exhibition viewers move around, talk, telephone, wonder whether they should stay or go, and so on. They are within the work, not only in front of it. Simultaneously they are passers-by, silhouettes, hesitant as to their movements, creating an assemblage and a specific place with the works in the exhibition. Like the last replicant in Blade Runner, they accumulate perceptions and recollections, and adjust them to their own memories. They are also part of what the other viewers see. They experience a different pleasure from that of the captive audience – perhaps what Helio Oiticica calls the 'crelazer', which mingles the words crer (to believe) and criar (to create) with lazer (leisure): something fertile and organic that fulfils our need for the philosophical and sensual, and for movement, more effectively than an imposed sequence.

EL - Various presences have gradually made their appearance since 2009. Can you describe them?
DGF - This began with stagings for orchestra and audiences, like K.62/K.85 for Performa, in New York, which featured the shade of Orson Welles and the sound presence of other characters and actors. Little by little, these presences have become spaces and moments in the same way as the rooms and exhibitions. The internal space has been turned inside out to form an apparition on the outside. It is like an inversion; a room is like an architectural costume floating around the audience, and an apparition can become a space. While it consists for both audience and artist of being in the work and immersed in it, the exploration of the moment where the work appears or is formed – which is normal for actors and musicians – becomes a fascinating situation for the visual artist, who often experiences a delay between the act of creation and the presentation. A being can be a space, or can enter a character as though entering a space.

EL - These presences make up a forward-looking, fragmented work, M.2062, initiated in 2012 and still open-ended. Can you tell us about this gradually evolving series?
DGF - In 2012, in the Serpentine Gallery in London, a vision of myself in 2062 appeared, presenting an opera I had worked on for several decades, inspired by figures like Ludwig II, Fitzcarraldo and Lola Montez, and composers like Bernard Herrmann, Philip Glass and Benjamin Britten. While I was narrating this opera, it took shape in reverse, and when there were other invitations to other locations during the following years, the characters began to talk, sing and propose their own version of this opera. These characters "work on the edge of what constitutes the work of art. They are an attempt to go right inside the work – to be the work." The next apparition will take place in November at the Centre Pompidou as part of the exhibition.