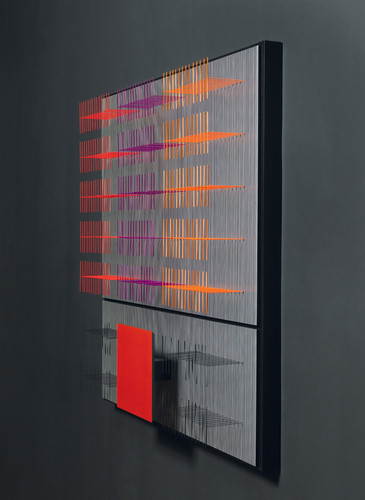 Jesús Rafael Soto (1923-2005) was one of the leading lights in the revival of kinetic art in Europe in the 1950s and 60s. From 1967 onwards, he created the legendary Pénétrables: volumes suspended in mid-air consisting of thin vertical tubes through which spectators can move. Today, the arrival in the Centre Pompidou’s collection of 20 landmark works from between 1955 and 2004, donated to the state by the artist’s family, fill in some significant gaps and offer further insights into his artistic journey. Centre Pompidou is exhibiting this exceptional group of works for the first time.

The donation offers an opportunity to apprehend all the meticulousness and subtlety of a work which has been persistently built up in a dialogue with the founding fathers of abstract art – Mondrian, Malevitch and Moholy-Nagy – and with the artist’s contemporaries, Yves Klein and Jean Tinguely foremost among them. Indeed, Soto’s first Parisian paintings, exhibited at the New Realities Salon in 1951 – the year following his arrival in Paris – already bear witness to his intention to “get Mondrian moving”. By using Plexiglass from 1953 onwards, he was able to introduce the shimmering effects of light into his work and, in his own words, “dematerialise” their painted geometric forms. From 1958 onwards, Soto began to use metal in his works, compounding the black and white striped backgrounds with scrap wire or suspended tubes which create a moire effect, appearing to shimmer in the foreground. In his desire for a work of art to consist, not in a completed composition of subtly blended forms and colours, but in a means of apprehending reality in movement, the artist is pursuing a similar course to new Parisian realists such as Klein, Tinguely and Spoerri and the German artists Mack, Piene and Uecker from the Zero group – alongside whom he frequently exhibited between 1955 and 1965.

As kinetic art became fashionable, Soto eschewed the facile illusions of Op Art, choosing rather to integrate spectators wholly into his works. For instance, in 1967, in the Denise René gallery, he hung up his first Pénétrable with the idea of including himself – and other visitors – amid the tubes hanging from the ceiling. In 1969, he wrote the following: “It is no longer a case of people being over here and the world over there. People are part of the whole, and it is this whole that I want people to feel through my encompassing works.” The twenty pieces that make up the donation to the state illustrate this radical development. From the paintings on Plexiglass of the 1950s through to the Cube Pénétrable devised by the artist in 1996 for his Galerie du Jeu de Paume retrospective in 1997, via the wire and suspended tube Vibrations of the 1960s and 70s and the Ambivalences of the 1980s, inspired by Mondrian’s later period, the Soto donation offers a magnificent review of the outstanding career of a master of kinetic art.
www.centrepompidou.fr