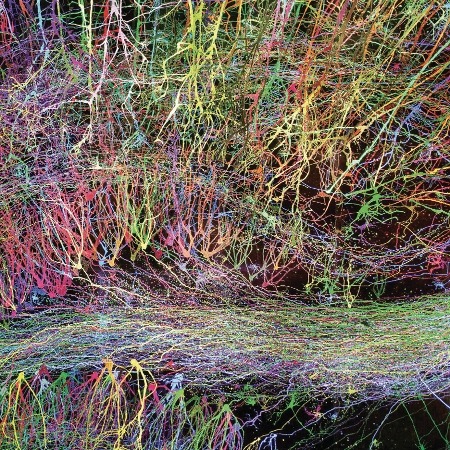 While artificial intelligence appears to have invaded all the industrial fields of the contemporary world, from finance to medicine, games to behaviour, architecture and the military, this situation has never really been linked to the history of neuro-science and neuro-computation. The exhibition “Neurons, simulated intelligence” highlights the links between the research of artists, architects, designers and musicians, and that by major scientific laboratories or the industrial sector. In the framework of “Mutations/Creations”.

With “Mutations/Creations” the Centre Pompidou becomes a laboratory for creation and innovation at the frontiers of art, science and engineering. Each year, the programme brings together artists, engineers and scientists. For its fourth edition, “Mutations/Creations” pursues its prospective research through two exhibitions. “Neurons, simulated intelligence” associates technical progress and artistic representation around artificial intelligence. “Jeremy Shaw” presents a unique immersive project, which flirts with science-fiction and alternative cultures.

INTERVIEW WITH THE EXHIBITION'S CURATOR
What were the challenges presented by this exhibition?
Frédéric Migayrou – ‘Neurons, simulated intelligences’ sets the latest creations – both technological innovations and industrial applications – in context, in a type of archaeology of artificial intelligence, over a fifty-year period. Through artistic works, the exhibition offers a critical take on technologies for simulating intelligence. It’s all about demystifying the idea itself of artificial intelligence, which is all around us today, and causing it to come up against human intelligence through mechanical, machine and computer simulation. In order not to think of artificial intelligence as a fantasy concept, we need to understand it instead as something that is rooted in logic and mathematics. It is a long-running and ongoing story, which has reached the point today of built-in intelligence, in the form of aids to driving, for example.

The whole exhibition highlights the continuity of an evolution of neuronal networks in the computational domain, both for neuroscience and for applications currently being developed in the domain of artificial intelligence and Deep Learning. Let's enable the public to understand the story and let's show that artificial intelligence is a simulation system, but by no means a system of substitution for human intelligence. The exhibition reviews the shift from a machine age and machinism, inherited from the 19th century, to the age of information and data processing, or the data age.

How is the exhibition organised?
FM – It is organised around five main areas of research, each defined according to historical fields of reference in the form of graphs, which provide a timeline of corresponding innovations and creations. It traces a genealogy of intelligence simulation. An initial graph features historical representations of the brain in the form of 50 images. So, visitors can see how the brain has been represented throughout the ages, and particularly during the Renaissance, in etchings and drawings. There's also a real brain in formaldehyde, and Raoul Hausmann's Mechanical Head, which prefigured the concept of mechanised thought. A second graph underlines the abiding interest of computing innovators in the logic of games (chess, Go, etc.) and its depiction in the form of decision trees. For example, we show the decision trees of Deep Blue, the first chess supercomputer devised by IBM and which beat champion chess player Garry Kasparov in 1997. This was the real turning point, the moment for which scientists had been waiting for more than a century, when the intelligence of a machine surpassed that of humans. We’re also presenting the research conducted by DeepMind, the British company specialising in artificial intelligence founded by the neuroscientist Demis Hassabis and now owned by Google, which created the AlphaGo programme. They also developed the StarCraft online game, for example, which is well known among gamers.

The exhibition goes on to chart the surge of interest in cybernetics and the development of mobile robots that could interact with their environment. We’ve called this the cyberzoo, as it’s a collection of representations of cybernetic animals, notably those invented by Norbert Wiener and Claude Shannon, and which were, in fact, the first robots. There are ladybirds, mice, an electronic fox... We deliberately decided not to include anthropoid robots, because they’re too closely associated with the idea of machines taking over human faculties.

The fourth graph deals with mind expansion and provides an overview of the research into cognitive faculties conducted simultaneously in the military and art worlds. On display, for example, are psychedelic works by Richard Aldcroft, the Mind Expander helmet by the Viennese group Haus-Rucker-Co, and the work of musician Alvin Lucier. The final graph focuses on the classification of knowledge in the form of trees and diagrams of neural networks, demonstrating how important the history of statistical simulations and logic has been in the development of artificial intelligence.

What part have artists played in all of this?
FM – Artists are very much in the front line, because of their ability to experiment, invent and come up with alternative ideas for use – their capacity to be critical and innovative, essentially. The question is how can creative people appropriate these technologies, and the thought processes that accompany them, for their own ends. And also, how can they construct a critical discourse that will inspire the public, too, to question itself in relation to these technologies. We’re showing Chinese videographer Lu Yang’s work on the manipulation of the brain, as well as images by the photo-journalist Maxim Matthys, examining the misuse of facial recognition technology by China to monitor the Uighur people. AI applications like DeepFace are incredibly powerful tools, but their manipulation by totalitarian regimes could have dangerous implications.

Will the human brain really be deciphered one day?
FM – We’re not going to arrive at a complete understanding of how the brain works tomorrow or the next day. Even the Swiss scientists behind the ambitious Human Brain Project, which seeks to simulate the brain, acknowledge that, despite the level of complexity they’ve managed to drill down to using hugely powerful computers, they are still a long way from being able to simulate intelligence models like those of the human brain.