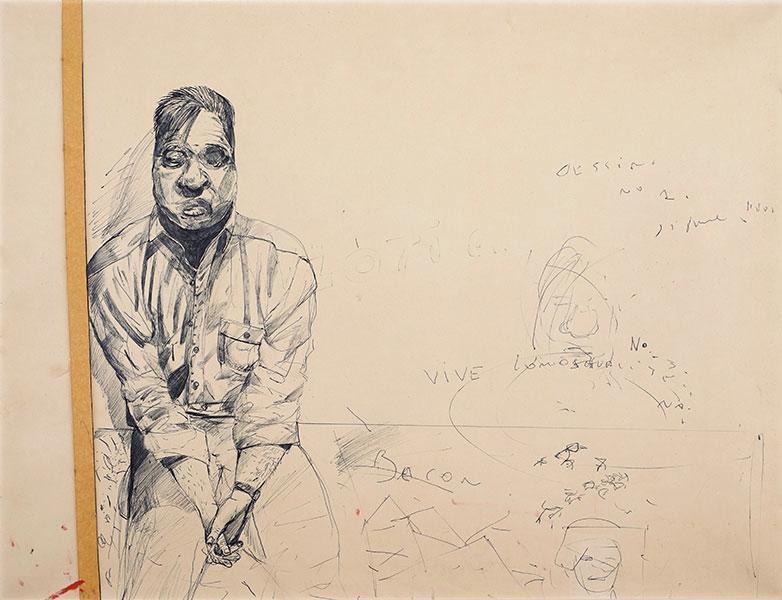 The mysterious circumstances surrounding the death of Stéphane Mandelbaum, assassinated in 1986 at the age of 25 and his ability to take on multiple personalities make the life of this Belgian artist worthy of a fictional novel.

In the form of a narrative, the exhibition retraces the real and fictitious lives of Stéphane Mandelbaum through some one hundred drawings. The son of a Jewish father and an Armenian mother, Mandelbaum questioned his Jewishness as from his first productions at the age of seventeen. He multiplied figures of Nazi dignitaries, distorted symbols and accumulated titles and imprecations in a Yiddish he attempted to perfect. He was fascinated by figures of magnificent outcasts, such as Arthur Rimbaud, with whom he identified as a teenager; Pierre Goldman, whom he portrayed several times and quoted constantly in his works; or Pier Paolo Pasolini, whose face fascinated him so much he reproduced it in some twenty drawings.
Despite his young age, Mandelbaum rapidly appropriated the cultural references of his artist father, Arié. He had a passion for the films of Buñuel, Lanzmann and Oshima. He had multiple interests, studied Bacon’s work closely and drew inspiration from Antonello da Messine, Kubin, Pollock, Picasso, Hokusai and Hergé. The rebellious young man soon began to copy and distort photographs found in pornographic magazines, doubling their transgressive nature through his detached approach. Multiplying portraits of tired prostitutes, pimps and gangsters with sinister faces, he produced a vision of the criminal world which fascinated and would ultimately consume him.

Like his life, Mandelbaum’s work appears to be marked by urgency. The classic form of his large portraits is corrupted by strokes, wording and collages which invade the margins like sardonic comments. The 50 x 65cm formats, covered in figures and writing in all directions with ballpoint pen, are the result of both automatic drawing and planned composition. As for his small, more abstract and succinct daily sketches, they form a sort of log book, touching on Outsider Art. The unfiltered projection of his imagination, Stéphane Mandelbaum’s drawing, in its ability to avoid any form of categorisation, appears strangely contemporary.
www.centrepompidou.fr