Surrealism and The Object 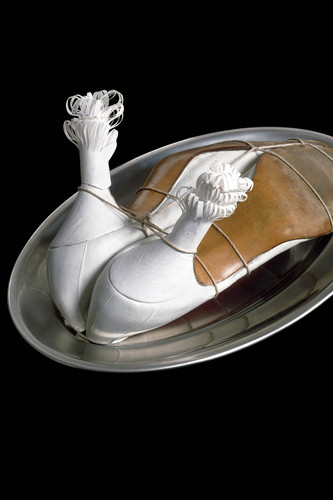 A second chapter in the history of Surrealism began in 1927 when its most active members (André Breton, Louis Aragon, Paul Éluard, Pierre Unik and Benjamin Péret) joined the French Communist Party. Brandishing the banner of Surrealism, Breton and his friends asserted their aim of surpassing and reinventing the real. The movement's founding Manifesto of 1924 called for an "interior model", and a contempt for the perceptible world symbolised by the closed eyes of the figure in Giorgio De Chirico's Cerveau de l’enfant (1914). Dreams and the powers of the subconscious inspired an automatism in drawing and writing; a "high speed" poetry designed to move far beyond reality and throw it into turmoil.

The Surrealists' stand alongside the young Communists of the review Clarté, and their discovery of Leon Trotsky's biography of Lenin were signs of a political awareness, from 1925 onwards, that led to their joining the Party. This coming-together implied absorbing a materialism and a reality that formed the theoretical and philosophical heart of Communist ideology. Responding to this change of direction towards realism, Breton enjoined the Surrealists to found a "physics of poetry". Communist ideology, which implied a rejection of the commercial fetichising of works of art, and suspicion of an "artistic genius" that confirmed the social division of work, soon gave a "revolutionary" meaning" to the iconoclasm that Surrealism had inherited from Dada. The object, soon to crystallise the thinking of militant Surrealism, was set to establish itself as the response to this new philosophical and political context. Ten years before the creation of Surrealism, in 1914, Giorgio De Chirico and Marcel Duchamp invented two objects that were to gain enduring currency in the plastic imagination of the movement. De Chirico painted his first mannequin, while Duchamp bought the bottle rack that became his first "ready-made" in the DIY department of BHV (Bazaar de l'Hotel de Ville). The Manifesto of 1924 presented the mannequin as one of the most propitious objects for producing the "marvellous" sought by Surrealism. From Hans Bellmer's The Doll (1933-1934) to the mannequins forming a line on either side of the "street" in the 1938 "International exhibition of Surrealism", wax or plastic figures would regularly turn up in Surrealist events. Meanwhile, the 1938 Dictionnaire abrégé du Surréalisme (shorter dictionary of Surrealism), recognised the fundamental role played by Duchamp's ready-made in the invention of the Surrealist object.

While they took up the ready-made idea in "recycling" everyday items, the first Surrealist objects were also created with collage and the game of the cadavre exquis (the free juxtaposition of heterogeneous elements) practised by the Surrealists since 1925. André Thirion relates the circumstances of their invention: "Dalí and I endeavoured to find basic points from which every Surrealist can exercise their talent in a common direction, within a discipline accepted by all. One of my concerns was to prevent our interest in psychoanalysis and relationships between the conscious and subconscious drifting towards philosophical assertions that our opponents would call idealistic, giving substance to accusations of Freudism. [...] Dalí proposed producing objects with a symbolic function." Alberto Giacometti's Boule suspendue, discovered by Salvador Dalí and André Breton in 1930 at the Pierre Loeb gallery, was the prototype of these new objects. The Catalan artist gave an initial definition of these new types of creation: "These objects, which lend themselves to a minimum of mechanical functioning, are based on the fantasies and representations that can arise from the performance of subconscious acts." For a number of years (up to his break with Surrealism in 1935), Giacometti produced several of these playful objects, which could be handled.

At the beginning of the Thirties, a series of events led Bellmer to start work on an articulated doll, a more modern version of the figure of the Surrealist articulated mannequin. In the winter of 1932, his mother sent him a case full of his childhood toys. "Among the nostalgic remains enclosed in this marvellous box there were some dolls with disjointed members mingled with indescribable remnants." At the time when Bellmer was moving closer to Georges Grosz, the painter of Dadaist automatons, he discovered the doll Olympia in Offenbach's opera based on the Tales of Hoffmann (The Sandman). A crucial landmark in Surrealist "mannequinerie", Bellmer's Doll was imbued with the erotic dimension associated with these female effigies, from the myth of Pygmalion to Bibiena's licentious tale (La Poupée or The Fairy Doll, 1747) and modern silicone dolls. These mannequins aroused the sense of "strange strangeness" inspired in Sigmund Freud by the doll in Hoffman's tale, which he theorised in his book of 1919 (Das Unheimliche).

The "Surrealist Exhibition of Objects", shown at the Charles Ratton Gallery in May 1936, was dedicated to the quintessence of a Surrealism with the ability to transfigure and transmute objects, and thereby reality itself. A far cry from any expertise or "artistic genius", the power of the designation "Surrealist" was the very subject of the exhibition. A high point in Surrealist thinking applied to the object, it constituted the top of a curve tracing a process of conceptualisation and assertion, of a Surrealism expressed in its simultaneously poetic and theoretical purity. In the showcase and on the walls, there was little or no sign of the know-how or talent valued by the "bourgeois" aesthetic. Ready-mades temporarily removed from their functional anonymity, these objects defied all speculation or fetishism (like René Magritte's Ceci n’est pas un morceau de fromage, which was taken to pieces at the end of the exhibition, restoring the cheese cover to its original use).

In the press release he took care to write for the exhibition, Breton drew up a taxonomic list of the objects exhibited: "natural objects that are mineral (crystals containing water several millennia old), vegetable (carnivorous plants) and animal (anteater, œpyornix egg); interpreted natural objects (a monkey in ferns) or ones incorporated into sculptures; disrupted objects (meaning altered by natural agents, fires, storms, etc.) [...] several objects from Picasso's studio, which take their place, historically, with the famous ready-mades and assisted ready-mades of Marcel Duchamp, also exhibited. Lastly, so-called "savage" objects, the finest American and Oceanic fetishes and masks. [...] Mathematical objects, surprising materialisations of the most delicate geometry problems in space, found objects and interpreted found objects, lead us to the actual Surrealist objects. "

This list indicates the objects composing the "wall" that André Breton was to assemble in his Rue Fontaine studio after the Second World War. And just as the wall would, the Ratton gallery exhibition "surrealised" the old cabinets of wonder (Wunderkammern) and cabinets of curiosities. Monuments of pre-scientific knowledge, these appeared to Breton like the vestiges of a time when poetic intuition and rational knowledge still existed side by side – a compatibility that Breton would see born again in the theories of quantum physics. Among the objects lined up in the showcases, the "mathematical objects" (these modern scientifica), discovered by Max Ernst at the Institut Henri Poincaré, possessed an exemplary status. They gave visible form to complex mathematical equations, illustrating to the very highest degree the calling of Surrealist objects to found a "physics of poetry", rooting ideas in reality. They elucidated the nature of Surrealist found objects, concretions of dreams and desires.

The demystification of the work of art and the plan to make Surrealism a part of the material world, reflected in the invention of the object, was also expressed by a conquest of the actual space. This took the form of staging Surrealist exhibitions in a way that heralded the art of the "installation". Marcel Duchamp, enthroned as "generator/arbiter" of the 1938 "International exhibition of Surrealism" at the Galerie des Beaux-Arts, was in charge of the exhibition "set" and "stage design", for which each of the participants was invited to "dress" one of the sixteen mannequins forming a line on either side of the Surrealist Street. The presence of an automaton – an "authentic descendant of Frankenstein's monster" – announced for the preview led one critic to compare the exhibition to a "ghost train".

The threats posed by the Second World War to the Surrealists drove them into exile. The break caused by the war led to the development of Surrealist thinking applied to the object, which became the basic material of assemblages with a constructive logic still similar to that of the Cadavres exquis. In the US, Max Ernst produced anthropomorphic creatures by assembling plaster moulds of domestic objects (bowls, plates and the like). Alexander Calder's meeting with Joan Miró in 1932 had led him to widen his formal vocabulary to a biomorphism inspired by the plants and animal world. The group of sculptures he produced in 1935-1936 by assembling pieces of polished wood evoke the works of Jean Arp, and the objects of Miró.

Pablo Picasso was one of the key protagonists in this assemblage sculpture, which rapidly became a speaking element in Surrealist plastic art. In 1912, he began introducing objects from his daily environment into his works, like Composition à la chaise cannée. His 1914 Verre d’absinthe, which he had thought up in 1914, incorporated a real spoon. His use of everyday objects became a significant part of the work he began developing in the early Thirties, when he moved closer to Surrealism. In 1942, his Bull's Head resulted from the assemblage of a bicycle saddle and handlebars. A few years later, the Vénus du Gaz (1945) was no more than a gas stove burner placed in a vertical position.

The "Surrealism in 1947" exhibition, which opened on 7 July 1947 at the Maeght Gallery, remained faithful to the principle behind the invention of the Surrealist object: that of surpassing art. In the catalogue preface, André Breton talked of the "recent poetic and plastic works", which "have a power over minds that surpasses that of the work of art in every sense". In 1947, this power was identified with the ability of these objects to act as the leaven of a new mythology. The heart of the exhibition was a room containing "altars" dedicated to "a being, a category of beings or an object that could possess mythical life". Productions of the mind, these "psycho-objects" seemed like esoteric avatars of the ready-mades of Duchamp (who was once again responsible for the "installation" of the exhibition, laying down general staging principles that were given shape by the architect Frederick Kiesler).

Responding to André Breton's call to found a "physics of poetry", Joan Miró briefly abandoned painting in 1929 to produce a series of Constructions, in which Jacques Dupin saw an undertaking that "challenged a plastic tool too easily dominated, after long immersion in troubled waters – the mother-waters of the subconscious and dreams" . These Constructions were a mixture of "collage" and "ready-made": ""He does not collect things like an aesthete in a hurry to play with them, turn them on their heads or subject them to his whimsy, nor to integrate them into a constructor's vision. No, he transplants them as they are, welcoming them into his ploughed earth, his play area." Giving them a joyously unstable, precarious anthropomorphism, Miró revives the playful verve of the Cadavres exquis.

What is exhibited in art today under the auspices of the object is based on principles advocated by the Surrealist object. The play on words and images characterising the ready-made inspire the work of Ed Ruscha. The "disturbing strangeness" of mannequins continues to fascinate Paul McCarthy. The "games" of Hans Bellmer's Doll are prolonged in Cindy Sherman's Sex Toys. Heim Steinbach places Surrealist psycho-objects on his contemporary consoles. Philippe Mayaux perpetuates Marcel Duchamp's anatomical moulds (Objet-dard and others). Théo Mercier reinvents the Cadavre exquis in a souvenir shop for tourists. The iconoclastic, libertarian vigour of Surrealism innervates Arnaud Labelle-Rojoux's practical joke and trick store. The magic of the Enigme d’Isidore Ducasse lives on in Mark Dion's proliferation of postal packages.
www.centrepompidou.fr