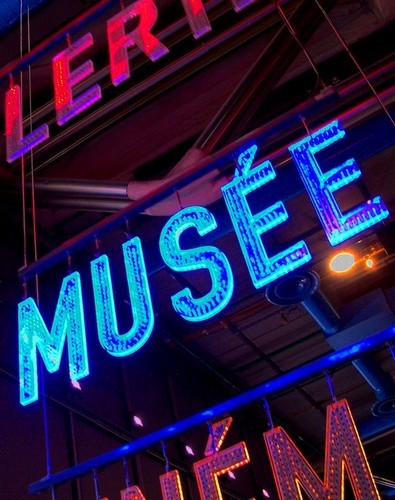 Since the 30th anniversary of the Pompidou Centre in 2007, the new presentation of the historical collection from the National Museum of Modern Art enables the major monographic collections, which lend it its wealth and uniqueness, to be celebrated.

The founding donations of the collection, from artists or their families, have become considerably enriched during the last thirty years. At the same time, the museum has opened itself up to other creative fields, always driven by the desire to form coherent ensembles: on the occasion of 'elles@centrepompidou' for example, the works of female artists were exhibited over successive thematic rooms indicated by a red coloured doorway; Dora Maar, Gisèle Freund, Laure-Albert Guillot, Lisette Model or Diane Arbus for photography, Eileen Gray, Charlotte Perriand or Janette Laverrière for architecture and design.

It is to one of these women, the architect Gae Aulenti, that the spatial redevelopment of the museum was entrusted in 1983 when she installed an orthogonal framework, structured by rooms and a criss-cross of paths. The recesses and display cabinets of the Museum's criss-cross of paths, designed like 'streets', offer, since April 2009, actual 'micro-installations' which pepper the course and introduce other branches of art history, such as the Bauhaus, the Russian Ballet, the informal art or the films of Fernand Léger... One of those recesses compares the photography of Brassaï and his fantastical vision of daily life with the 'pictopoetic' creations of Victor Brauner, while another is exclusively dedicated to the year 1923. There are so many different ways of understanding the intersections, groupings and rifts which form the historical fabric of more than half a century, from 1905 until the beginning of the 1960's.
www.centrepompidou.fr