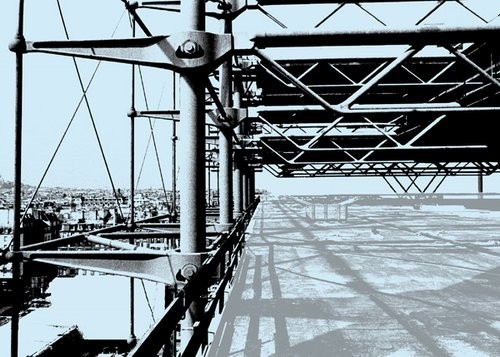 A quite exceptional event, "Vides" (Voids) is a retrospective of empty exhibitions since that of Yves Klein in 1958. In almost a dozen rooms of the National Museum of Modern Art, it assembles in a totally original manner exhibitions that showed absolutely nothing, leaving empty the space for which they were designed.
The idea of exhibiting emptiness is a recurring notion in the history of art over the past fifty or so years, almost to the point of becoming a cliché in the practice of contemporary art. Since the exhibition by Yves Klein – "The Specialization of Sensibility in the Raw Material State of Stabilized Pictorial Sensibility" in Paris in 1958, totally empty exhibitions have been the statement of different conceptions of vacuums.
While for Yves Klein it was a way to point out the sensitive state, by contrast it represents the peak of conceptual and minimal art for Robert Barry with "Some places to which we can come, and for a while 'be free to think about what we are going to do' (Marcuse)" (1970). It may also result from the desire to fudge the understanding of exhibition spaces, as in the work "The Air-Conditioning Show" from Art & Language (1966-1967), or to empty an institution to modify our experience, as in the work by Stanley Brouwn. It also reflects the will to create the experience of the qualities of an exhibition venue, as with Robert Irwin and his exhibition at the ACE Gallery in 1970, or with Maria Nordman at her exhibition in Krefeld in 1984. Emptiness also represents a form of radicalness, like that created by Laurie Parsons in 1990 at the Lorence-Monk gallery, which announced his renouncement of all artistic practice. For Bethan Huws and his work "Haus Esters Piece" (1993), emptiness means being able to celebrate the museum's architecture, signifying that art is already there on site and there is no need to add works of art. Emptiness assumes almost a sense of economic demand for Maria Eichhorn who, in leaving her exhibition empty at the Kunsthalle Bern in 2001, helped to devote the budget to the building's renovation. With "More Silent than Ever" (2006), Roman Ondák, for his part, had the onlooker believing that there is more than what is just left there to be seen.
www.centrepompidou.fr