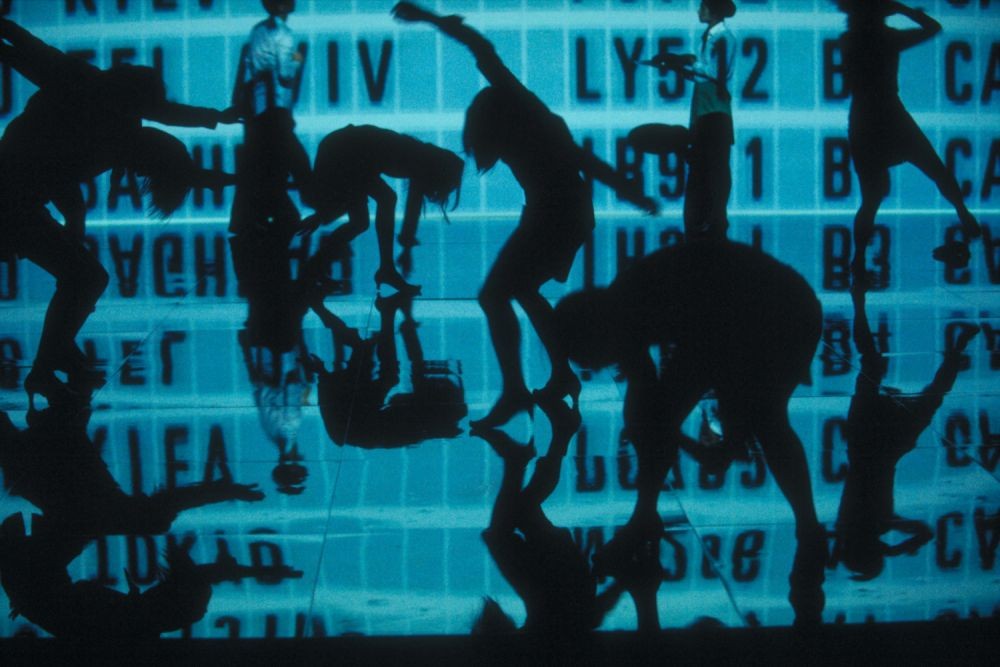 The Dumb Type exhibition is the first monographic exhibition in France of this magnitude dedicated to this art collective. Formed in 1984, Dumb Type, in its early stages, was made up of about fifteen Kyoto City Art College students from different fields: visual artists, video artists, choreographers and performers, as well as architects, graphic designers, sound engineers and computer scientists who combined to invent a new, fundamentally pluridisciplinary type of performing art.

In English, dumb can mean “mute” or “stupid”. Teiji Furuhashi (1960- 1995), the central figure of the group, explained in an interview the critical approach suggested by the name “Dumb Type”: openness to the West and the economic bubble that culminated in the 1980s made Japan an increasingly superficial society, devoted to the media, consumerism and technology, in which every individual is “overwhelmed with information, without being aware of anything”, and where desires stand side by side with despair.
In reaction to this era and to the multiplication of theatricality and gimmicks, Dumb Type has created an experimental theatre in which the performers’ bodies serve to support the images, sounds, sets. Sanitised and unrelenting, the technology that proliferates in Dumb Type pieces formats the bodies and challenges the mind.

The first political gesture of Dumb Type lies in choosing to work as a collective; the desire for several people to work together was aiming for a total interdisciplinary approach, abandoning categories and academic hierarchies. This system is clearly visible in the hybrid nature of the group’s projects, where live performance and multimedia installations are interwoven. A new form of theatricality is taking shape, haunted by immersive technology, controlled by omnipresent data. Very active until the early 2000s, the company has regularly performed in museums and theatres in Japan, Europe and the United States, where some of its members have lived at times. Active on the international scene, Dumb Type examines the mutation of identities and communication in a globalised world.

The collective removed all dialogue from its early works, but the silent performers were surrounded by quotes from articles or lyrics of pop songs. New media and the digital revolution have transformed our intimate confession or direct addresses to the audience. behaviour, our subjectivity, and more broadly our humanity. Yet, at the heart of these data flows, the strobe lights and electronic music, a lively sensitivity was clear. This existential dimension can be seen in Dumb Type with the inclusion of more popular and fragile forms, such as karaoke, talk show, cabaret, drag performance, intimate confession or direct addresses to the audience.

In 1990, for one of its first projects, Dumb Type transformed the theatre stage into an immaculate pit, where the performers’ bodies are regularly swept by a machine with a giant scanner. PH borrows its title from the ”potential of hydrogen” used in chemistry to measure the acidity of a solution; the texts that punctuate the piece, however, also evoke the “potential Heaven/ Hell” of a Japanese society locked in a middle state, a harmful juste milieu, which Furuhashi compares to limbo. The following pieces will send shock waves through this cold neutrality. In S/N (1994), Furuhashi announced that he was HIV positive, displaying labels with the words “male”, “Japanese”, “homosexual”, “HIV +”. Phrases projected on stage counter this brutal categorization: “I dream of losing my gender”, “I dream of losing my nationality”, “I dream of losing my blood”. Videos of nude torsos filmed through targets complete this clinical treatment of the body. As with pH, the title S/N refers to a measure used in science: in acoustics, the signal/noise ratio measures the interaction between signal and noise, which influences the quality of transmission of information. The arrival of the compact disc in 1982 marked the transition from analogue recording to digital, where there is no longer any background noise. For Furuhashi, this elimination of ambient noise is symptomatic of a society that ignores all that it does not want to see or hear.

As part of its Japanese Season, the Centre Pompidou-Metz is presenting five major Dumb Type installations, including a new installation produced for the occasion. Some of these works are the respective productions of three of the very first members of the collective – Teiji Furuhashi, Ryoji Ikeda and Shiro Takatani – who, alongside their work in the collective, continued to produce solo projects. Archives and testimonies are also presented in the exhibition and retrace the genealogy of the group, before and after the death of Teiji Furuhashi in 1995. This understanding, both physical and documentary, of a selection of works from Dumb Type allows these striking creations to be considered in a new context, while placing them in perspective within the current context of a society still dominated by an excess of information and consumption.
www.centrepompidou-metz.fr